Another Day, Another Catastrophe (Day 140, Year 2) 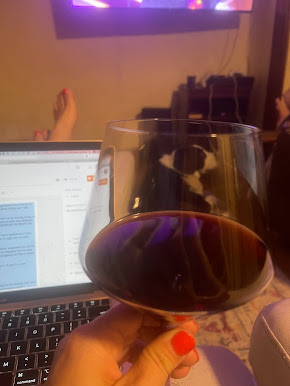 Picture it: it is 10pm and we are very far from home. I mean "very far" is an exaggeration; but it was not in our county and it was outside of my designated "radius" which is comprised off about 5 miles and 7 tiny towns.

Where was I? Oh right, 10pm, far away, outside of my radius, in another county and we are driving, trying to deposit our dramatic (she was just in a musical!) 16 year old at a bar (PJ Whelihans) to meet other dramatic teenagers for wings. And as we are driving, police officers are CLOSING ROADS RIGHT IN FRONT OF US.

Like, roadblocks and cones and standing in front of the road with the posture of "don't speak to me," arms folded across their chests and one officer was even wearing RAY-BANS, at 10pm at night very far from home!

Anyway, it was very mysterious. Mike, who was becoming a little, tiny bit impatient, suggested Lily call the other theater children. She called on some party line (seriously!) and a dozen or so teenagers were hooting and hollaring and laughing and providing no insight on how their parents were navigating the Men in Black situation. (I imagine with rage, impatience and the desire for a road soda.)

So, Lily never made it to the bar; which is better anyway, because you know, she is 16 and it is a bar.

This leaves me wondering the following:

1. Why did we leave the home? A catastrophe always happens!

Honestly, if isn't one thing its another (like the dog eating the trash and throwing it all over the home) or another (a pre-theater sister altercation over things they don't even understand) or another (my mother's insane fixation on turning off the air conditioning when there is a storm).

Seriously, is this a thing? Must we sweat with actual sweat and fear when there is a thunderstorm? This just does not seem necessary.

I know everyone thinks me insane--all these epiosdes and busting into friend's living rooms shouting things like "THE ROAD BLOCKS WERE PLACED RIGHT IN FRONT OF US." But this is actually my reality. I try to have a calm, simple life, but somehow, someway:

Someone or something always tosses a bit of glitter and chaos in my path.

The only solution, a glass of Eldridge red and a short sleep because you know what they say:

Tomorrow is another day and catastrophe, so rest up!