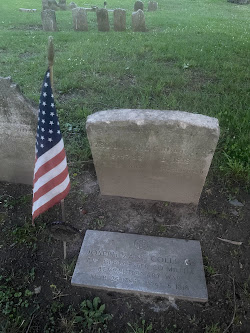 I have a Revolutionary War cemetery across and down a block from my house. I didn't give the cemetery much thought and I gave the dead even less thought. Which is so utterly ridiculous, because across and the down the block from the home I am raising my children in and writing and laughing and living freely, lies the remains of the soliders who made being an American possible.

Today, when we walked down to the annual Memorial Day service in the cemetery, Mike wanted to look at some of the graves. And we've certainly looked before; but today, one stone stood out for Joseph Zane Collings. Joseph was born in 1763. He was 13 years old in 1776.

Joseph was 15 years old when he enlisted and fought until 1783. He survived and live to be 55 years old.

He was a child solider fighting a war against opponets who on paper had everything going for them. I wonder what compelled him to fight. I wonder if like my teenagers his drive was more about the short terms wins--the selfish drive to make things better for themselves versus the drive to make America something for their ancestors. I imagine it was maybe a little bit of both; after all Joseph was just a boy, so his days were most likely mixed with fierce dedication and drive and fear and doldrums and everything inbetween.

But, across and down the block from my house, his body rests and so do so many more. I cannot believe I did not think about them much--after all the Revolutionary War feels so long ago, so long that it is almost a fiction and impossible to believe. Colonists were like characters than actual, living 13 year olds, who had to wait 2 years to fight.

My 13 year old today was complaining about being forced to walk down there to the service and demanding to know what time we'd go to the pool and being 13. Mike and I both told her she was being disrepectful, as we waited for the Honor Guard to get into position and salute the dead. But, then I thought about my recent trip to the Ameican Cementry in Normandy, France. That Cementry sits on the cliffs of Omaha Beach. And along that coast, all the D-Day landing beaches are beaches today. They are delightful seasides resorts and respites and spots for families to swim and picnic and enjoy Normandy.

And isn't that what all those men and women who have served our country served for? They made an extraordinary sacrifice so we could live our ordinary lives.

They served for the freedom to spend long afternoons at the swim club and days reading on the beach and afternoons weeding the garden and field trips and friends laughing too late in the backyard and shooting basketballs and soccer tournaments and losing races and winning some, but really just to be able to live, freely.