The Woman Without a Buy Nothing Group (Day 96, Year 2)

Inspired by a man I heard about who reported that he was recently poisoned and offering foreign language lessons to the members of the Local Buy nothing group, I decided to try to get into the Buy Nothing Group (which has my very small town's name in it's title) for a third time.

I know this opening paragraph raises several questions. Like how was the man poisoned? Is he a foreign language teacher? Why is he allowed to access social media? Why did this information inspire me to aspire to a life of buying nothing and sharing my bounty with my neighbors?

I don't have answers to the first three questions. But the fourth question is easy: I felt very left out of meaningful dialogue involving a poisoned yet recovering neighbor who is offering free Mandarin lessons and general advice on speaking Dutch. Being excluded is very triggering for me!

Well, friends, it won't surprise you, but the third time was not a charm and I was yet again, rejected. 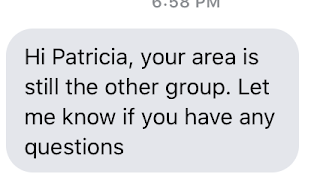 Apparently, while I live in my town, the organizer feels I don't really live in the town I live in and must join the Buy Nothing group for a town I don't live it. I really don't understand, but rest assured, I will think about this rejection for the rest of my life.

I will be vindicated someday, when the organizer finds herself in need of something only I have in my possession, but refuse to share and instead light on fire in front as she watches and realizes that she will forever be without a 1983 Peaches N Cream My Little Pony and finds herself unable to pay her debt to the vintage toy collector.

Look, I really have no idea what goes on in these Buy Nothing groups because I am not allowed in. Later, I tried the other group, based in the town I do not live in and do not know a single person in and I was rejected WITHOUT EVEN A NOTE because I don't live there and why would I join?

I am a woman without a Buy Nothing Group and I am not sure I am okay with it! But, I have no choice. I must hold onto my grudge, transform it into a witty response (because you know I HAVE SEVERAL POINTED QUESTIONS BUY NOTHING GROUP ORGANIZER), be prepared for my response to go unanswered and then plan my revenge.

For now, I guess I will continue my "Steal Things From the Curb on Trash Day That I Happen To See When Driving to Dance" and "Just Order from Amazon" and "It's Got to Be in the Basement"lifestyle.