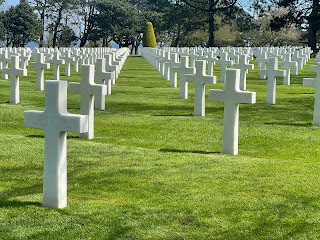 Today we visited the D-Day beaches in the French region of Normandy. It was intense. At the American Cemetery, the white crosses went on forever and ever, and those graves are filled with boys--boys the age my father was when he enlisted in World War II--who are dead. They died because of a shared belief in freedom. They died because they felt driven to enlist and fight and protect the world.

As we walked the cemetery today, all I could think was: "Soldiers, look, look at all of us, you made this possible, you gave us our lives."

I am the daughter of a World War II veteran. His name was William Carrington.

My father was like water--he was going to flow and if one path proved impassable, he'd find another. He hated tyranny. He hated injustice. He hated racism and bigotry. He also hated war.

Yet, he fought in one. My father was a World War II veteran. He registered for the draft and lied about his age in 1939. He tried to enlist in Canada. Then, when the U.S. joined the war, he was rejected from the traditional armed forces. My father was deaf in one ear; he found his path to fighting in WWII via the merchant marines. He spent that war on merchant ships--ships with minimal artillery, ships that were targeted by the Germans over and over and over again. He was torpedoed at least 3 times--one time which led to his ship sinking in the South Atlantic.

He signed up for another contract after that. And then again. And again.

He brought supplies to Portsmouth, England, over and over again, in order to help defeat the Germans. He told me that he did all of this because he hated tyranny and he hated war; yet he felt so compelled to fight.

What you cannot see right now, are the tears in my eyes. You also cannot see my heart and the blood that beats through my veins--half my father's blood. I carry him with me, always.

My father's service is the reason I am able to travel France with my daughter; and why I even exist. Their deaths and service made my daughter's life possible. It is the reason our children can live such a free and privileged life.  My Dad witnessed terrible things; but then he lived and he was able to see how much his fight let to freedom.

I cannot thank my Dad anymore for his service; I am not sure I ever did sufficiently. But, I am so grateful--because that service gave me everything--it gave all of us, everything.