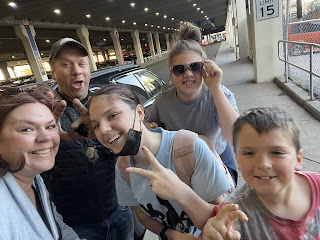 I spent the entire day weighing myself and then weighing myself holding my luggage. (Fun fact, your weight really does fluctuate all day and my ham sandwich weighed a pound.)

I had to make tough decisions around my French layers! And also make Lily be my shoe mule. She is not entirely happy about it; but she can cope! I am taking her to France!

Mike wondered aloud (VERY LOUDLY) what it was I was doing all day. He’s the frequent flyer, who is constantly jetting off and seems content without 4 shoe options and never packs a blow dryer; so it is hard for him to understand the time consuming dance and lift of weighing oneself and one’s baggage.

And then I spent at least one hour hugging each of the other children. I am going to miss them so much!

Anyway, this is happening! I cannot believe it! When Lily was in the NICU we used to call her Lilliput, alluding to Gulliver’s Travels. Lilliput became Miss Put which became Madame Put. Then there was the Paris themed first birthday and the 11th Paris Birthday. And then there was Lily fighting to take French; even her team thought it would be too hard. And it has been hard; but that’s what makes everything worth it.

We are so blessed to be on this trip together. Next Yoke: live from Paris!!!! Weeeeeeeee