All The Things That Have Annoyed Me This Week (Day 97, Year 2) 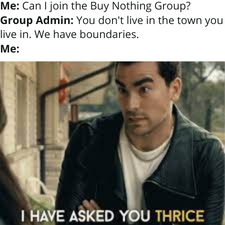 There was recently a lot of screaming. I was mostly screaming, exasperated by my children and their screaming and crying and showing one another their fists in weird displays of aggression and superiority.

Honestly, am I raising a pack of wolves?

Anyway, now everyone is fine. My husband hid in the basement during the screaming. Not that is he averse to raised voices. He, in fact, has the loudest, meanest voice, although everyone thinks he's laid back and easy going. I am sure I've mentioned how much this annoys me, this perception thing and on the other hand, I don't want anyone to perceive my husband as terrible. I just want some recognition that I am not the terrible one.

This long ramble is just a way of opening up tonight's Yoke, which is v.v.v.v. appropriately called, all the things that have annoyed me this week:

1. The Children. I love my children. But sometimes even the most basic interactions end in the wild animal screaming. And they are messy. Why are they so messy? I mean I am messy, but they leave a trail of debris and trash and strange sticky substances. Why is this? One of them literally just sneezed directly on the floor and then used their barefoot to clean it.

2. The Strange Sticky Trail. On Monday I discovered a strange sticky patch on my kitchen floor by the door to my mother's apartment. I questioned her and she responded: "I wondered what that was." As I began to look around I saw there where to and from footprints (I should totally become a detective!) in MY MOTHER'S SIZE AND IDENTICAL TO HER WEIRD HOUSE CLOGS SHE WEARS BOTH IN AND OUT OF THE HOUSE. Anyway, I questioned her again and she said she was sticking to the floor but kept at it, not to be deterred by leaving a trail of horror. Then she shut her door and locked it, leaving me with my vinegar (organic, red wine, all I had left!) for cleaning the floor and the long sticky trail.

3. YouTube. I am so tired of shouting, like a lunatic, over the voices of a YouTube influencer who is describing how they built a box fort or admitting a stunt with an alligator and a kitten. My children are so wrapped up in this idiotic video that they cannot even

4. As promised, the buy nothing group situation, which will haunt me for an eternity. I replied back to the woman who rejected me thrice under the guise of asking questions, but really I just complained extensively. I imagine that I will not receive a response and be blocked by her. In fact, I could be thrown in FACEBOOK jail, which would be a twist. I was not mean. I was my irritated, complaining self pointing out logic and getting out of breathe.

5. Password changes. Why must I change my passwords every 30 days? Why is this a thing? Once I hit 30 days, I have just started to remember the current passwords and then they change, again. And then, I am inevitably locked out of accounts and have to send strange texts messages to colleagues asking them to contact a third party with information about my whereabouts. It is simply, too much.