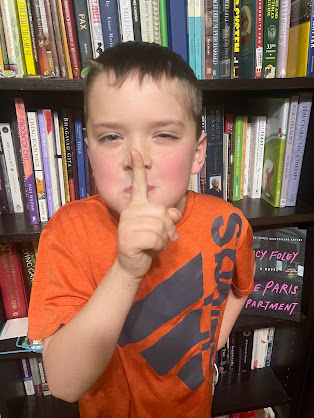 In our household, we talk about everything, except the things we do not talk about:

1. We do not talk about the spice level of food. Saying a comment like,"Oh this is spicy," will lead to the immediate cessation of the consumption of the alleged spicy food.

2. On a similar note, we used to be unable to say "chew," because this would lead to the child who needed to chew their food to immediately begin gagging and spitting out their food. Thankfully everyone is over 17 months old and this is no longer an issue.

3. I often prohibit my family from talking about the complicated schedule for the next day. It gives me anxiety to listen to them try to puzzle through the time puzzle I already solved. I'd prefer if they'd just be quiet and do as they are told, while smiling and occasionally humming a lovely bird-like song (this has never happened).

4. And, we DO NOT UNDER ANY CIRCUMSTANCES discuss the changing of the clocks for the beginning or end of Daylight Savings Time.

We do it for the same reason the Madrigals don't talk about Bruno:* because if we bring it up, then no one will ever stop talking about it and blaming it for all their problems.

And look, the clock change is absolutely to blame for the bulk of the problems in this world. Whether it is beginning or ending, it's all the same garbage. Someone messes with our time--they give us an extra hour to endure or they take one hour away from our already limited time.

Thankfully, our modern cellphone clocks just simply change the time while we sleep (for one hour less than we had just the night before!). We wake up and the time is whatever it is. If we talk about the time change, instant confusion ensues. I used to question if my iPhone had actually changed the time and then worry it had not and then worry it had and I did not believe it and then I'd try to manually change it and I don't think you can actually do that and then I was so exhausted from the confusion and the missing of one hour, I had to immediately nap.

I've hidden Nick's watch from him all day because the time does not automatically change and now I think I might not give it back to him until October when Daylight Savings Time ends, because I cannot figure out how to change the time and so far, I think I've kept the beginning of Daylight Savings Time from him, which is like a major motherhood win.

But, I cannot explain any of this to him because I actually don't really understand it at all and because we don't talk about it.

Once, I spoke about it and when asked to do something the children would say, "I can't I don't have enough time today! I have one hour less!" And it is impossible to argue with them, because they are right, they do have one hour less. I've tried to embrace this logic when Daylight Savings Time ends and tell them they could do more because they have one more hour, but then they reply,"I am too tired from this 25 hour day," and of course, they are right again.

So, we don't talk about it. If you see my children, do not ask them the time.

*You know the song was already stuck in your head anyway.