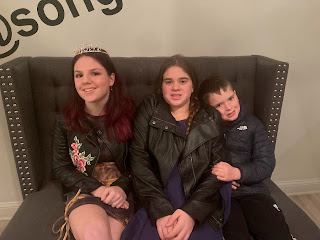 I grew up with a certain amount of shame around my brother. It's hard for me to write that; but it is the truth. It wasn't that I was ashamed of my actual brother; it was just that I had no idea how to talk about what happened to him and why he did not talk and why he waved his arms and why he didn't go to same schools as I did.

My parents told me most things about David--we talked about him all the time. But no one ever told me what to say to the outside world--a world that doesn't pay attention or always understand.

I was ashamed that I did not know how to tell David's story; so, I simply did not tell it.

However, in my house, I've worked hard to make it different for my children. It is important for my children to know how to talk about cancer and brain tumors and the things that have happened in our family. These are tough subjects. I can't hide any of it from them; because it affects them.  I want them to feel secure and empowered to tell their stories and their family's stories when they want to and to whom they want to.

Lily has gotten to a place where she is pretty secure in telling her cancer story. For the first 10 years of her life, when she would give short little speeches or do an interview about herself, she would not say "I had cancer" or "I had a brain tumor." I remember the first time she said "I had ependymoma," it felt like a breakthrough. She needed to be able to say and talk about it, without shame and with the right words. It is not that I feel she needs to be a public speaker--again, this is about her choosing to whom she tells her story and feeling confident in her words.

Lily worked out scripts with her doctors in the survivorship clinic about her shunt failure--ways to answer questions and ways to respectfully decline to have a hard conversation.

My younger two each have their own way of sharing. Chloe is more reserved--if she talks about childhood cancer it will to someone she really trusts--but she'll talk about it. Nicholas will tell his story to everyone. And it is truly his story--the story of being a sibling to an old sister who had cancer.

At school, a friend did not believe Nicholas when he said he had a sister with cancer. The friend was confused and did not realize Nick had two sisters. Nick said he was so upset because his friend called him a liar.

Sadly, I've navigated this with both of my girls. Other children and even adults, sometimes, have a hard time believing hard, sad things or even believing that a baby could survive a brain tumor. It is demoralizing to have your truth challenged. There isn't much you can do, except keep telling your story, in your words, when you choose and to whom you choose.

I told Nick I was proud of him for being very open and honest about his life. And that every time he tells his story of being a SuperSib, he is helping another child who maybe has a sibling who has walked a hard path feel a little less different.

Maybe, his story will help someone else find the words to tell their own.