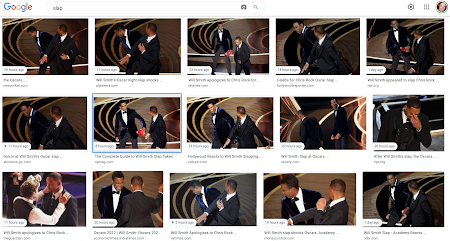 GUYS! Did you know that Will Smith slapped Chris Rock at the Oscars?

Of course, you did! It's all we are all talking about today. In the midst of my own giant to-do list, I found several hours to discuss the slap heard everywhere but the United States, where the broadcast was muted and censored for our delicate American ears.

I know I am just adding to the noise by talking about it more, however I cannot help myself.

The whole thing is bizarre, right? After the slap, everyone embraced "The show must go on," and on it went, which to me was the most disturbing.

Wasn't there someone in charge? Someone who is a grown-up, who could remove the person who had a very cold, calculated reaction and slapped another person who used their words in a less than desirable way?

Are there other places you can slap a colleague and sit back down, only to stand up up later and get a big time award? Can anyone else in the world slap someone else at WORK? Because going to the Oscar is part of the job for the actors who have made it, right?

I mean this is all like on another plane, in an alternate reality, right?

Anyway, here are a few other "slappy" takeaways from the Slap:

And I think that is the lesson we can glean as we bear witness to this Hollywood meltdown: we don't all wield the same privilege and power; but the areas in which we possess privilege and power should implore us to act in ways that move life forward, instead of leaving us stuck in the weeds of nonsense.

And friends, I've been stuck in the weeds of nonsense with all this for too long. Tomorrow, I shall forget about The Slap and move on to whatever other nonsense ensues. Maybe someone will steal someone's mailbox or run off with their costar. . .whatever it is, I am here for it!