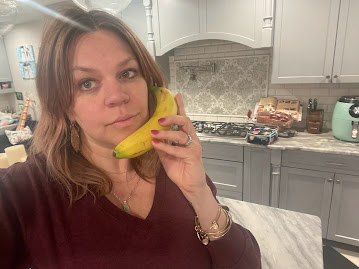 One of my kids called their sibling a "Bozo" today. The alleged  "Bozo" was not pleased and retaliated by taking all the lacrosse balls and some of the field hockey balls and throwing into the bamboo forest in my rear yard.

Yes, I am still thinking about Will Smith and Chris Rock and Jada Pinkett Smith, but only on occasion, because I have my own dramatic problems including the Bozo situation and understanding where in the world my child learned the word,"BOZO."

If you are on the edge of your seat wondering if the name caller who was in the bamboo forest searching for lost balls until sundown and the alleged "bozo" made up, rest easy. My gang of high strung kiddos always make up and then turn against the one they were not against before and then continue in this round robin fashion until everyone is a victim and a bully but mostly I am to blame for everything. They all love to remind me that I have failed by:

I have not been called a Bozo (yet). So I guess that makes me lucky.
I've discussed this constant loud (so loud) sibling fighting with my therapist, who laughed and said she fought with her sister constantly. I mentioned that I don't have a true frame of reference since my sister was 25 years older and busy conning people in Florida and my brother was non-verbal and intellectually disabled, so I would feel guilty if we fought; but if we did silent fighting with pinching was the best way not to get caught.
She ignored all the childhood baggage I dumped on her and then said, just remind yourself that yelling is not allowed in your house.
And then I laughed, because if there was no yelling, I'd be scared they all ran away or were hiding in the closet to jump out and scare me.
But, my therapist stayed on this track of thinking and said I needed to tell myself yelling was not allowed, so maybe when they yell I simply stop acknowledging it is happening because it can't be, it isn't allowed. I think she is telling me to will myself to an alternate reality--the one in which screaming "Bozo" is not really screaming "Bozo," but instead is akin to hearing a lovely, quiet, sedate conversation about clowns and circus arts.
I do often wish I could be delusional and not think so much about everything. So I decided to try some delusion today!
Today, when the alleged "Bozo" and the name caller kept screaming and running around the yard screaming and coming in the house screaming, I put on my air pods and listened to Lady Gaga covering Elton John. Eventually the yelling stopped, as did Lady Gaga, and the alleged "bozo" and the name caller came together and proceed to produce a series of Tik Tok videos that involved pretending to slip on a banana peel (circus arts!) and then actually slipping on a banana peel.
We are out of bandaids and ice (from the weekend of sport-adjacent injuries), which, of course, is my fault for being ill-prepped for Tuesday and the circus arts, as one would have it. But no one yelled, that I could hear, at least, I had moved on to listening to Nirvana to soothe my nerves and will myself into a delusion.
Posted by Trish Adkins at 7:17 PM