Lily has been dockside since her shunt failure in June 2021. She has worked out at practices. She coxed for the newer rowers in the Fall. She has erged. But, she hasn't rowed with her team.

And it is a complicated issue--her shunt failure coupled with her past diagnosis mixed with her balance multiplied by the rules of the sport and combined with Lily's determination to stay with "her" team. To say it's been difficult and challenging does not nearly begin to scratch the surface of the matter; but Lily, filled with grace and grit, had options--coxswain somewhere else or quit.

Lily, of course, chose neither. She stayed with her team. She is up at dawn to go to a practice that leaves her on the launch. She is rigging boats she won't row. And then, she is doing some private practices with an amazing coach. Lily is determined to row on the Charles River, someday, in a regatta.

When she told me of her goal, Lily immediately said: "Mom, this might not happen, I know. But I am determined."

Parenting Lily has taught me so much about life and sports. Lily fails and struggles so much, friends. She has from the moment she born, unable to breathe on her own. But, she keeps going. She falls and stands up. She is sidelined and she still shows up.

We learned early on with Lily, when she was just a toddler relearning how to crawl and learning how to walk after her brain tumor diagnosis, that we had to cheer for her the hardest when she fell. And Lily fell a lot. She'd get tired and not want to try. She'd bruise her face in her fall. She'd feel in pain and sick and not want to pull herself back up. 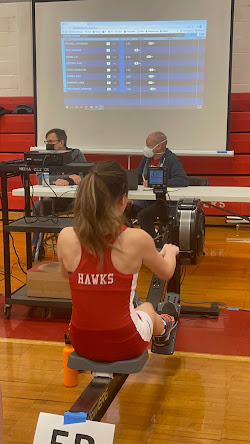 She believed, friends. And if there is nothing else I ever do in this life that is momentous, cheering my daughter through failure will be enough.

I carry those days with little Lily into our days parenting Lily, the athlete. I cheer her dedication every day. I give her permission to make other choices. I cheer her when she is exhausted. I cheer her without ever looking at her times or scores or place in a race. I cheer her like she is crossing the finish line at the Olympics even when she is sitting on the launch writing down times.

Because this all matters more than anything--I know that the fruits of this will be her belief in herself and her success. What that success will look like--well that's anyone's guess--but there will be success.

When I parent my other two athletes: Chloe (cross country, field hockey, lacrosse and swim) and Nicholas (soccer, flag football, lacrosse and swim) I draw on all the lessons from the days in physical therapy with Lily. I cheer their gifts--leadership, dedication to rules, sportsmanship and determination. I cheer their caring hearts and their strategic minds. I cheer when they simply show up on the field and try, because this is always the hardest step. I cheer when they have hard practices and games--telling them how much I admire their individual gifts.

And their success--I have no idea what it will be--maybe they will be super stars on a field or in the pool. Maybe they won't. But it does not matter, as long as they believe in themselves and see all that is possible through sharing their gifts, their hearts and their hard work.