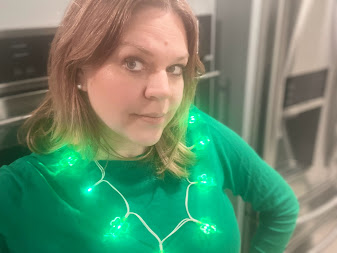 Friends, I have never spent a St. Patty's Day Irish.

Until this year, my Ancestory.com DNA has revealed that I am 4-percent Irish! I had a suspicion there was a tiny bit of Irish on my mom's side; but really just the tiniest little bit and it was only based on a name "Nettie Kelley," the name of one of my maternal great grandmothers (my mother's father's mother.) But, there was no clear Irish evidence, no one amplifed St. Patty's Day except for my non-irish Dad who loved a theme. My grandfather did have red hair, supposedly, as a young man.

By the time I came along he was partially bald and white haired.

I just assumed the Kelley was a remnant of a long ago marriage and if I was Irish, it was like a touch of Irish,  like a sprinkling.

Of course tonight, my mother claims she always knew we were Irish and that my Nana, who was Danish, always said we are all Irish on St. Patty's Day.

My mother is not reliable! This is why I had to test my DNA!

The other parts of me on my Ancestory are not surprises--at all--I am the exact percentage of Scottish, Danish and English that I should be. I am German--more than I expected but I guess there is a sprinkle from the other side of the family too. Still, it is amazing to look at a map and see the places my family came from. My father, who was born 102 years ago,was the son of a first-generation English-American--my grandfather Carrington's parents were born in England and then immigrated to Rhode Island. The story is they always worked in textiles and came to Rhode Island for more opportunities and eventually, my grandfather migrated to Philadelphia and worked in hosiery mills.  His mother, my Grammy, was half-German and half-Scottish. And while it sounds silly now, I often wonder how the German me the Scot in Philly.

My Mom is half Danish--her mother the only one of her siblings to be born in the U.S. in Lansing Michigan. Her parents traveled back and forth from Denmark to the U.S. and had to return during WWI for my great grandfather to fulfill his civil duty (I think). I am still not clear on how they afforded all these journeys back and forth, but they did. And my mom's father is a mix of so many things--a little northwestern France (there is a 5-great grandfather named Johanne with a son named Valentine and then a 4 great aunt nicknamed Lulu, which is the nickname we gave to Lily), a whole bunch of English (from Essex!) and then the Irish, which I just discovered.

I don't really know why I am telling you all of this, but I do know it is such a fascinating thing to stalk oneself and one's lineage. I've found Civil War draft cards and some evidence that points to the American Revolution on my mother's side. I've found census records in which reveal that my paternal greatfather changed his career a lot; but the one that intrigues me is "Private Investigator." There are death certificates with causes of death and tomsbstones with nicknames. There are branches and branches of families with 12 children and 15 children.

I think of those future people, as well, the people who will carry on the little pieces of me in 100 years and beyond. Will they think I liked to be called Patricia? Will they know that I am Trish? Lulu, after all, was really Louise, but someone had the sense to write Lulu on her tombstone. I think Lulu is who I am drawn to the most. . .she named herself. But, she was not Irish (she's from the French line), so I'll have to toast her when I am in Paris next month.

For now, I'll sip my Irish Whiskey (which tastes like Lysol, by the way.) and think of Nettie's great grandfather, Smith Kelley and wonder, did he ever think of me?