The things with this Wednesday (Day 47, Year 2) 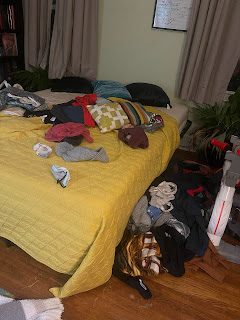 It is only Wednesday and it feels like it is actually next Wednesday, because surely more than a few days have passed since the weekend.

But, alas, it is actually this Wednesday and as some people like to call it, it is "hump day." Note: I have never in my life called Wednesday "hump day." I think it is gross phrase and stupid. Especially stupid is the saying "Happy Hump Day!" Why would anyone ever say this? Why must people speak in this way? I get the analogy, but its annoying.  It reminds me of when my mother informed me that she "bought some new bling" and that "bling" was a new word.

Like, is it? A new word? "Bling" is only good for starting a Wordle (I'll let you know how this goes tomorrow!)

Anyway, there are several things with this Wednesday that make it particularly trying, like:

1. The clean laundry has given up and exploded.

This morning, this laundry was in a basket. Then at some point it was dumped. And now it has given up its will to stay orderly and exploded all around the room. I had to adjust the position of my camera today to avoid this as my background.

2. I shouted about medical records "not being anyone's business" on a routine call.

I have no idea why I said this, but I did. Well, actually I know why I said this, because I am exhausted from disclosing every frigging sniffle to the school like I am trying to escape from a tuberculosis sanatorium. Yeah, I am crazy!

3. I gave an early morning speech about Math that both made me proud and ashamed.

I had a math teacher meeting for one kid in which I discussed my middle school geometry teacher (who would only call on boys. I am still angry!), my belief in math as the most important subject in school (It is!) and how when it is just you and the math problem, you have no one but yourself to rely on. . .then I went into a long dramatic story akin to describing how soliving a word problem is the same as one competes in an Olympic event while diffusing a bomb.

See above for what's wrong with me (hint it is a Wordle option!)

4. This is day 3 of casual "names for your penis" discussions with my son.

Listen, I am not going to list the various words and phrases that my son wanted to discuss. Apparently, he is at the age in which penis talk is funny and fun!  Most are worst than "hump day" and "bling." One was "the no-no square" which is not language we use around here. I try to use the anatomical words. Of course, what I mostly try to do is not DISCUSS THIS EVER AT ALL AND CERTAINLY NOT FOR THREE DAYS STRAIGHT.

And because it is Wednesday, this means tomorrow is Thursday and I have kind of a busy day, so I'll be living in Hidden Valley Ranch until at least the weekend. . . good thing I have a stock of masks to wear.