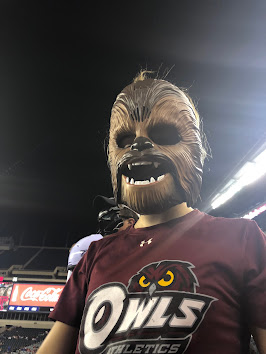 I'll give you a clue. . .it involves something COVID-y and something you wear. . and it is not your smile, because no one can see your smile. . because it involves. . .

People are STILL FIGHTING OVER MASKS.

I would say I cannot believe it; but I totally can. Human beings are very repetitive and very passionate. My children are still arguing over a box of candy someone received for their 6th birthday and someone else ate. They will argue over this to the end of time. There will be no winner. And at some point one of them will realize that no one will ever win.

So then they will take a deep breath and start the argument anew, citing new evidence ("You are the one who always had cavities."), victim impact statements ("I am now afraid someone will steal my things and I don't feel safe.") and fabricated facts ("I have you on camera").

Like the mask argument, it is one that will never end.

I now have "This is the song that never ends. . ." trapped in my head on repeat. If you don't know the lyrics, I can sing them to you.

Anyway, I think nearly all arguments are a never ending (often boring, arduous, exhausting) story. Here are some of my favorite endless arguments:

1.  The Location of the Center of the Bed

He won't allow we to get out a measuring tape at bedtime. I am ordering once from Amazon to keep under my pillow.

2. The Length of Time that is Equivalent to "Just a Minute"

My son often says "Just a minute," then sometimes an entire week will go by or other times it is more like an hour. I've suggested that a minute is 60 seconds and an actual measurable amount of time. He says I am wrong and "Just a minute" is "whatever he wants it to be, so leave me alone."

When Wordle first dropped on the scene, I thought it was something that would bring us all together. Of course, I was naive. In the past two weeks, I've had several, heated Wordle debates with friends and then one family member who claims one of the Wordle words is not a real word and is ready to blow up the entire conspiracy at Merriam Webster. (She is terrifying.) There is fighting about which word to begin with; what time of day to complete the Wordle; why isn't there more than one Wordle a day.

I've told everyone with a gripe to head to Sweardle. If you know today's Sweardle, well, you are more depraved than I thought possible and let's be besties.

There is always some drama around the Super Bowl. This year, as the ENTIRE FREAKING WORLD KNOWS, it is in person. This makes people angry and happy. I am sure there will be something wrong at half-time and even if there is not, people will argue about past half-times. The commercial will be both amazing in a good way and a bad way.

I am only participating in this ritual for the food. Which is something else people could fight over, but luckily my fried pickles are so good that everyone's mouth should be too full!

5. The Origin of the Loud Booms

This might be a highly local Haddon Twp. argument. There are these loud booms that seem to occur at random and as their official name dictates, they are loud. There are several theories, all of them exhausting and all them debated, heavily in a variety of community groups, including the one that encourages ranting.

In fact, I might head to the ranting group now, to start an argument over trash pick up and lawn debris bundling. This one really gets people going!