January 18 is Alex Scott's birthday.
Alex would have been 26. She died when she was 8 years old after fighting neuroblastoma for nearly all her life while simultaneously igniting a movement to cure childhood cancer through lemonade stands.
That's a whole lot of accomplishment for an 8 year old. Alex is a hero. Her family and their continued dedication to the charity that bears her name are heroes, too. 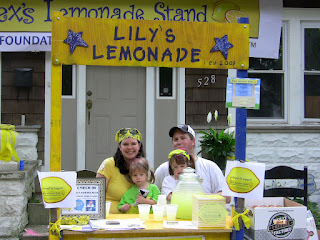 While Lily's cure was not directly from research funded by Alex's Lemonade Stand Foundation, the mission and the work of the Foundation have truly saved our family from complete despair and madness. I encountered Liz Scott, Alex's mom, in the lobby of the Children's Hospital of Philadelphia while Lily was upstairs in the pediatric intensive care unit. I was in a bad place. Liz was right there, a woman who had experienced my worst fear of losing a child, calmly telling everyone at a press conference about hope through science. And that was it for me. I went from hating and fearing everything around me, to embracing the challenge, because there was real hope when people all worked together.
As Lily recovered from surgery and radiation, we began planning our first stand. Chloe was born and on the weekend she was baptized, we held a stand in our front yard. We've held a stand every single year since 2009--13 years of making lemonade and trying to do something for kids like Lily.
In the beginning, I think my motivations were a little selfish. I wanted cures and treatments to be available for our daughter and I wanted to find something to make ourselves feel better. I feel bad writing that; but I always try my best to be completely honest. Somewhere along the way, between meeting other families who would become close friends for life and following the journeys of other heroes,  I found a different motivation--I never want a mother to ever feel hopeless, again. I never want another mother to miss her child. I cannot wave a magic wand and make this happen; but I sure can mix some lemonade and try. 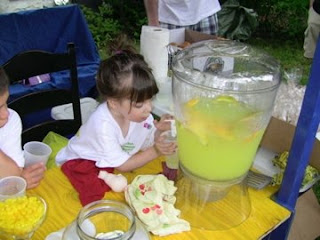 For Lily, hosting lemonade stands have always been about helping her friends (never herself), especially her friend Brooke.
Brooke, like Alex, battled neuroblastoma. Lily adored Brooke. And then Brooke died when she was 12. Lily was just finishing 5th grade. Something changed in Lily that day--but Alex's Lemonade gave Lily a place to channel her grief and a place to remember, honor and love the children who have died at the hands of the cruel beast of cancer. Our Lemonade Family has given my entire family a place to do all things that seem so hard to do in the company of those who have never watched their child battle cancer.
I haven't mentioned Chloe and Nicholas or Mike, yet.  I cannot fully speak to the impact ALSF has made on my husband, but I can tell you what I have witnessed. I've seen my husband cook up an insane idea to break the World Record for the Largest Cup of Lemonade with his daughter and I've seen him make that seemingly impossible goal happen. I've seen him open up his heart and share his very personal story to rooms full of seemingly very serious professional men and women, inspiring them open their hearts and wallets. And I've seen his holy, goodness shine through at each and every stand.
It's just lemonade, right? But it is so much more.
For my younger two children, I know that ALSF has given them proof that while bad, scary unexplainable 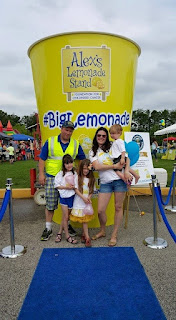 things happen in this world, the good, beautiful things happen and can be explained. I love reading my kids the children's book about Alex--because they get to see how they are in control of the good things in this world. They know their innate, holy power to do positive things. They also know they don't have to do all alone, they have their Lemonade Family and so many amazing friends, teachers, community members and strangers working together.
Without this family, we'd be lost. I don't know if Alex knew she'd also leave other kids facing cancer with a Lemonade Family; but she did.
Thank you Alex. Happy Birthday. It is an honor to say your name and know your story and keep doing our small part to move the dial for kids with cancer, one cup at a time.
Posted by Trish Adkins at 7:19 PM