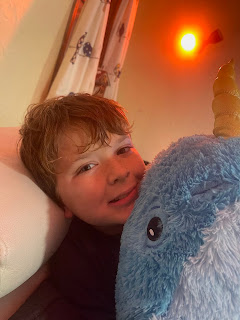 I named Nicholas after my father, who was named William. William, my Dad, was a sailor in the Merchant Marines in World War II, My Dad's ship was torpedoed and it sank, leaving my Dad adrift in the south Atlantic. He lived. When I asked my Dad how he made it adrift at sea, all night long, my Dad simply said, "I prayed."

Nicholas is the patron saint of sailors. As his story goes, he sailed through a storm at sea and that storm was calmed through his prayers. I like to think of the ancestral lineage that connects my Dad with my son--two ships that passed in the night on the way to heaven and on the way to earth. Somehow, I know they know one another.

On Nick's first birthday, I went down to my basement, thinking about how much I missed my Dad and wished he could be at Nick's party. As I was in the basement, looking for serving dishes and party supplies, I noticed that Lily's Birthday Cake Halloween costume was turned on. The costume had a light on top of the cake hat--all lit up. I did not turn it on. My husband was not home. The girls did not do it. I choose to believe it was birthday wishes from my Dad to his grandson.

But Nicholas is much more than my father's grandson and namesake. He is much more than our son. He is much more than a brother. Nicholas is a boy who has always earnestly tried to connect with everyone he meets. He looks people in the eye. He asks them questions. He remembers their stories. He invites and says amazing things like, "You are always invited," and he means it. He has tried since he was 3 years old to understand childhood cancer--and brain tumors--because he wants to understand his sister. He asks to go to MRIs, because he says, he cannot sit at home worrying. He tells his sister's story and the story of how kids can make a difference to his classmates. He thinks his middle sister is pretty much the best field hockey player in the whole wide world. He seeks to know her as well as he knows himself.

And Nicholas tells me nearly everyday how much he loves spending time with his family.

I believe him. He loves us.

Tonight, he said the most important thing at school is to remember that you are all a family--not just classamtes but family.  He told me that our neighbors on Eldridge (and Eldridge adjacent) are his family. I think he has more best friends than he has fingers and toes and the thing is: he does.

He thinks of each of his friends as his best. It is a not scam or the talk of an overzealous little boy, it is genuine and real.

And I don't know how he does it--I don't know how he remembers everything or has the courage to ask a classmate, who is the child of refugees, what it is like to be a refugee and how he can help or how he's made so much room in his heart. But, it's all him. It's all my Nicholas.

Happy Birthday, sweet, smart, loving, confident, genuine boy. We love you more than you can know--although I think you might know more about loving people than we do.