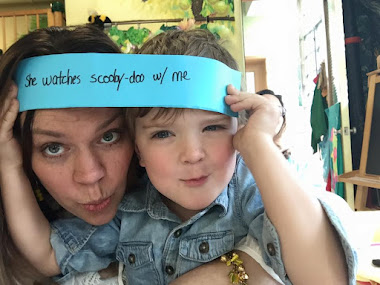 Tonight when I was tucking Nicholas in for the night, I wanted to tell him the story of before him. It's a story I've told him before and sometimes I feel silly telling it--even to my little boy.  But, it is the day before the day before his 9th birthday, so I am feeling nostaglic about it all.

Before Nicholas was even a possibility, it seemed like he was not one. I was so sick with my girls and in turn, they were so sick and in the NICU. After Chloe was born, I had to have an emergency oophorectomy. A cyst on my ovary caused it to twist--the torsion killed my ovary and left me in the worst pain of my life.

After all of that, I did not ever think number three was in the cards.

Now, I know you all might think I am nuts (and you are probably right), but I am really firm in this story. God meets you where you are--always. And I think through all my best schemes when I am in the shower. And what better scheme than hearing a voice tell you: you will have a son.

I laughed so hard that day because it was ridiculous.

Then a month later, there was the heartbeat on the ultrasound. And then there was Nicholas.

When I told Nicholas the story tonight, he looked right at me and said, "Mommy, aren't there babies who don't even get a chance to live or be born?"

And that just got me. Nicholas always asks the right question, at the right time.

Because there was a baby before Lily and Chloe and Nicholas. My very first, brief, excitng and then devestating pregnancy. That pregnancy was a total surprise just like Nicholas. I had no idea then if I'd ever be mother or when. I truly did not even know if it was possible, for no reason except it hadn't happened yet.

That pregnancy ended in a very early spontaneous miscarriage. It was the first time I expereinced deep grief and longing.

I think about that baby all the time. Nicholas asked me their name--and I couldn't answer because I don't have a name. I just think of that baby as the first and I wonder--who would you have been? If you were here, would there be Lily, Chloe and Nicholas? I have to guess that no, things would not be the same and that's the thing about hard things that happen in the past--you can't change them without changing everything.

When I think of the first, I think of our child who maybe watches over my babies who got a chance to be born. And that's what I told Nicholas, maybe that voice that made me laugh with pure joy over the miracle of having a son was the first whispering in my ear, too excited to keep the news any longer--a thin spot in the universe that separates us from heaven.