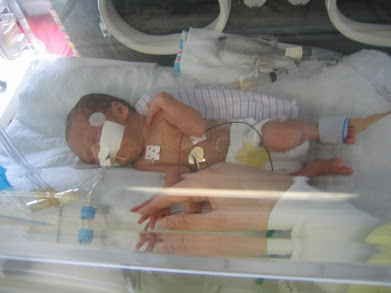 I remember when I told people that my daughter had been born prematurely. On several occasions, they would say something like: "Oh a cute little preemie! Like a Cabbage Patch Kid doll."

Which is literally the most cringe-worthy, eye roll inducing, rage stirring thing to say to a mother who just had a medically traumatic birth and now has a tiny, premature infant in the Neonatal Intensive Care Unit. Prematurity requires medical intervention and while both my daughters were beautiful from the moment they were born, it was not like having a Cabbage Patch Kid doll.

Lily was born via emergency c-section when I was 29 weeks 5 days pregnant. I woke up on the day of her birth with fluid in my red eye. I thought it would go away; I keep wiping at it. But, then I ignored it because I had my 30 week appointment (a few days early) that night and had a presentation to finish for the last meeting I was flying to the next day. I also had some fundraising brochure copy to write. My eye never really got better; and it was so annoying, so I decided to move my appointment up a few hours.

When I got there, my blood pressure was fine. There was protein in my urine--a lot of it. And I had gained 30 lbs in two weeks. My doctor, who saved my life and my daughter's that day, told us to go home, back a bag and get to the hospital. He said, you will have a baby by the end of the week,

When I got to hospital an hour or so later, my blood pressure was 220/100. Then is was 240/100. They called my doctor and the doctor said: the baby tonight. I spoke to my doctor on the phone, he said he would do a c-section and explained what would happen: I'd be put on magnesium sulfate immediately to stop eclampsia, the seizures that can happen when a pregnant woman has preeclampsia. I'd receive steroid shots to mature my baby's lungs; but they probably would not do much--we did not have much time.

A neonatologist came in and sat at the foot of my bed and told me all horrible things that could happen: death (she said this at least 7 times), brain damage (said over and over again), that she'd never run a marathon (weak lungs) and a slew of other horrors. But then she asked me if we knew the gender of our baby: and we did, but we never told anyone. A girl, she said, well a girl will be easier.

At least we had that. Lily was 2lbs 14 ounces when she was born at 10:24pm on 3/13/06. She cried and screamed and I saw her for a moment before she was whisked off to the NICU. Mike stayed with her. I was sewn up and then back to my room to continue my magnesium sulfate for 24 hours.

I did not see Lily in person for 24 hours. I remember when I saw my girl--my precious, perfect, so tiny, so sick, so strong daughter--on March 14, 2006 at 10:28pm. I thought I was going to be scared to touch her or be her mother; but the opposite was true, I felt so much of bravery and strength looking at this child who was not supposed to be here, but was. She was incubated. It would be 2 weeks before I could hold her. But, the way Lily looked at me when I spoke. My baby knew me.

The story was similar for Chloe, 3 years later. I developed sudden and severe preeclampsia (although I had plenty of warnings throughout my pregnancy, so there was a little more time). Chloe was born at 31 weeks,  weighting 3 lbs 4 oz. I would not see her until 24 hours after she was born. It was 10 days before I held her.

Lily spent 7 weeks in the NICU--learning to breathe, learning to eat, growing and dealing with "typical" preemie things--a low grade brain bleed (which self resolved) and a PDA that failed to close; but then did with a little IV ibuprofen. I remember the night they called with the news of the PDA--the most common congenial heart defect in preemies--I was leveled and ruined and broken. But, then it resolved. Our daughter thrived. She came home.

Chloe spent 4 weeks in the NICU--learning the same things her sister did; but those 2 weeks in the womb prevented the brain bleed and the PDA. Chloe thrived and like, her sister, she came home.

Preemies are not cute tiny babies in the Cabbage Patch or in incubators growing bigger--they are tiny warriors, fighting to breath and live and be hold in their mama's arms.