I know I should write about Veteran's Day (Day 316)

I am in a mood where everything is really annoying. My day started out in complete and utter pandemonium with missing cell phones, misplaced iPads and other drama.

Anyway, then there was so much work stuff to wade through, the house is in chaos, everything is difficult, I am newly annoyed by inconsistent and non-sensical COVID protocols at school and well, this is the crux of the issue, I am having some kind of creative block and cannot seem to get through one piece I am ghostwriting for someone else. This piece is late--it was due like 12 yesterdays ago--but I cannot seem to just simply finish it; which leads to me wandering through my life as if I have a hang nail. 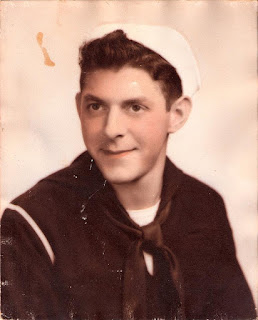 So here I am; writing a litany of really shallow complaints in my blog at 2:30pm in the afternoon, when I should be simply finishing the piece I need to finish, so I can have some mental closure.  Also gnawing at me: I feel like I should be writing about Veteran's Day. I am the daughter and granddaughter of two veterans (WWII, my Dad and WWI, my grandpop) and the daughter and granddaughter-in-law of two more (Vietnam and WWII); and I know there are some in my family tree who fought in the Revolutionary War and the Civil War, making me the product of the original American veterans.

Although when I think of it this way, we are all the product of Veterans of some war here or wherever our people came from. We the product of people who believed fiercely in a cause, who went bravely or even reluctantly to war (but they still went, didn't they?), who were forced to fight in order to survive, who, for some, war was the only world they knew because of their circumstances.

All that history and ancestral fighting makes me feel emotionally exhausted and then feel so ridiculously privileged, because everything I find really annoying today is not life or death. It is a luxury to be annoyed by missing electronic devices and COVID protocols and writing words. I've never once worried about being shot or bombed or an orphan or widow because of war.

And maybe that is what Veteran's Day is all about. Yes, we honor those who have served and fought in wars; but we also acknowledge that their walks in life have been marked with things that so many of us cannot truly understand.   We can see it, we can witness it, we can honor it, but how can we ever understand unless we've been the 22 year old on a merchant ship being torpedoed in the South Atlantic? Or the 25 year old, with a new bride at home, being gassed in a trench in France?

I cannot ever understand those experiences, but I can acknowledge them for the way in which they've shaped and formed my privilege, now and for generations to come.

My grandfather was that 25 year old. He came home from France in 1919, fathered 9 children and died when he was 67 years old of a heart attack. I never knew him. My dad was that 22 year old. He survived several attacks as a merchant marine, and spent some days in a lifeboat in the South Atlantic after his ship went down. I think of his story and I think of my existence that was so tentative back then--my father had to survive literal war in order for me to exist.

Their hard walks--the hard walks of all Veterans--resulted in the privilege I get to live today. I am so grateful to them for being able to be just who I am; ridiculous, overprivileged, comfortable and alive.

I don't have a good picture of my grandfather as a young man--but I do have this one of him with my cousin's family on Thanksgiving, which I think is pretty special. I am so grateful for him and his survival and this extended family that is mine. He's on the far right with the glasses. 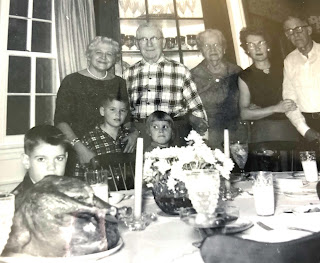