Oh, it's day 311! I once went to a 311 concert and it was like too wild for me, the girl who happily started mosh pits before they were banned. My friend Denise loved 311. I sort of liked 311. I feel like Mike loved and liked 311. Mike's best friend Brian was there. My best friend Karen could have been there. 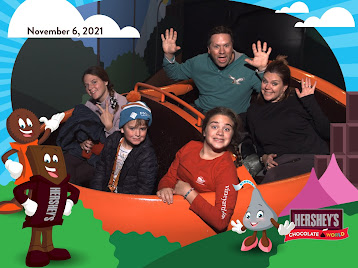 (I am not using any of the above as the teaser on my blog Facebook post tonight. Let me know you actually read this blog by mentioning 311 in the comments! Now, onto the real stuff.)

We are HOME! It was a whirlwind, as Hershey always is. We had a great getaway! Of course there were several trying moments, as there always are when people and strange plumbing are involved in things.

We stayed at a Marriott property that was new to us and the shower had some sort of strange mid-level jets. The jets would shoot out and spray the entire bathroom and make you want to run naked and screaming out of the shower. I did not understand this situation until I showered this morning. However, Nicholas discovered it last night and basically flooded the bathroom trying to escape the aggressive, angry shower jets.

Then he only wanted to sleep if he could sleep on the diagonal in a bed he was sharing with his sister. Which led to his sister, who is normally so quiet and rational, to scream that she had "no home or blankets." Then the other sister, who had a lovely twin sized trundle bed in the alcove, shouted "SHUT UP. I AM TRYING TO SLEEP." (Apparently, she thought she was the only one trying to sleep.)

Anyway, Nicholas ended up sleeping on the floor, by choice. . .and we all know how CLEAN a hotel room floor is, I mean, you could EAT off it, if you wanted to get a parasite.

Since we do not want to get parasites, I plan to burn his hotel floor clothes and shave his head in the morning.

Then today there were some tense marital misunderstandings over a smorgasbord and McDonalds. (We did not eat at either. In fact, neither of these establishments were in Hershey and were only mentioned with malice by both of us.). There was also a very long line, for a very short ride. I thought we were on the up and up as we entered Chocolate World (with all its scent-ography and CHOCOLATE!); but then there was some hysterical running to grab ALL THE CANDY AND RIGHT SOUVENIRS before getting in the very long line. This was, as I mentioned, hysterical (and not in the way my blog sometimes is, but in the other way my blog often is, riddled with hysteria and manic energy and screaming.)

But, then everything became PERFECT when we discovered a brand-new place at Hershey to spend money: the outdoor S'more cafe by Chocolate Word!

We all got the following:

We left the park, stopped at Jersey Mike's for some sandwiches to go and Mike drove us home while the children fought over car pillows, hot spots and candy from Chocolate World. (I read my book--a very simple Rom Com that seems to be set on the Galapagos Islands and involves people with marketing degrees and smoldering eyes.)
And now we're back! Henry (the dog) was so happy to see us! Rosie (the cat) remains in hiding. The girls have retreated to their bedroom to avoid us. Nicholas has firmly planted himself in our bedroom with the remote and Netflix. Mike is attempting to clean up the debris I happily spread around the home upon arrival and I am here, writing and avoiding the dishwasher (which I am nearly always 100-percent successful at avoiding, thanks Mike!).
Jersey Fall Break is a wrap--tomorrow is a return to church/sports/musicals/chore avoidance and of course, Christmas decorating!
Posted by Trish Adkins at 7:17 PM