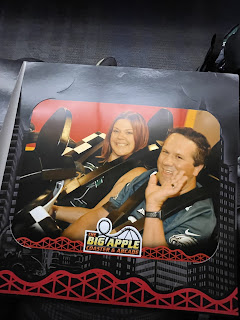 Today we went to Vegas, for the day!

It was marvelous, as Vegas always is in small, frequent doses.

As I write this, we are in the world’s longest TSA line, because apparently dogs are doing the screening. We had to walk in pairs as if in a wedding processional and a dog sniffed us.

I am happy to say that the sniffing dogs allowed us to pass and now we begin our trek home.

On our way to Vegas, we had a ground delay for “presidential air traffic” and then as we waited, I got the CNN alert that Chuck Schumer was flying to Wilmington to chat with Biden about something or other. We eventually took off and made it in time for the Eagles-Raiders game. Our ride (two Midwestern men Mike knows) handed us a Truly and a White Claw upon entering the vehicle. (These same Midwesterns also taught me how to take a selfie using the volume button! Shut up, I know this is knowledge I should have had!)

Anyone who knows me, knows that I am not a super big football fan; but I am a fan of all ticketed events that require a costume! So I popped on my Eagles costume (which led to this strange Raiders costumes man in Philly repeatedly saying “your going down.”)

In the end the Eagles did lose (so maybe this strange man was indeed blessed with the gift of fortune telling). To keep with the theme “going down,” two other things happened:

a woman fell behind me and gripped onto my arm and scratched it. It was very dramatic and possibly my fault, I do have pointy elbows and have been know to knock people with them. Also I totally shook her off me. Hopefully she’s okay?

Next up is the long red eye home. Monday will be exhausting; but the memories of this fun, ridiculous day are so worth it.  See ya next time Vegas!