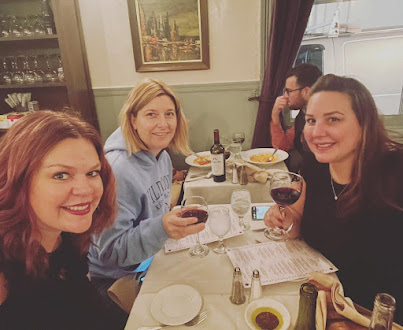 Let me tell you about this picture with two of my sisters.

Well, first of all, I was the only one who could take a quality selfie. And, I was the one on time to dinner, even though I had to stop to call 911 because there was a dead-ish person in the PATCO Station.

One of them absolutely hates tomatoes. She hates the texture. I remember when she told me that she hated tomatoes. We were sitting in the Sammy house on Temple's Main Campus and chatting. She was dating a Sammy brother at the time. She told me she hated tomatoes and I'll always remember because she was from Jersey--and I'd never met a Jersey girl who hated tomatoes. She loves mushrooms. Every meal I've ever had with her at a restaurant begins with mushrooms. I met her at an Olive Garden in Vegas once, with her then boyfriend, now husband and she ordered mushrooms. I always remember these things because she is a girl who always, definitively knows what she wants. When you've got sister standing with her, you've got it for life.

The other one never really knows what she wants and this is one of my favorite things about her, because we get to endlessly discuss all the options and decisions and sometimes I might just say, "You never know what you'll get," which, by the way, is wise advice in all situations and I think she does listen to me.  She picked me up and groomed me in Spanish class. (Note: she speaks bad Spanish. I speak no Spanish, so I don't even have room to throw shade.) At the time, I was a disheveled mess and had an ankle I sprained in an aerobics class. I have no idea what she saw in me. But she's one that I know I can turn to again and again, especially when I am a disheveled mess and unable to get myself up the stairs to class. She sees beyond the mess and the sprain and will always lift me out of the nacho cheese pile on the floor at the movies, like if something this specific ever happened.

These girls have been my sisters for as long as I can remember. There are other sisters, too, and the feeling is the same. The sisters who would literally drop everything to take my children in the middle of the night. Sisters who I know will be always be late to the funeral/wedding/rehearsal/brunch, but will be there, which is more than I can say for most. Sisters who move me to Vermont.  Sisters who would stand beside me and have my back in any fight, anytime, because sisterhood is thicker than anything.

Note: these are the same sisters who will unapologetically call me on my crap right to my face like very rude people. It's very shocking sometimes. But I forgive them, because, well, I have no choice. I love them.

There have been rifts. And trauma. And moves. And children. And marriages. And career changes. And differences of opinion and geography. And long nights. And shots and wine and very substandard beer from a keg in North Philly.

Yet here we are, 25 years after we first met, eating pasta and drinking wine in the city that first gave us to one another.

That, my friends, is sisterhood.