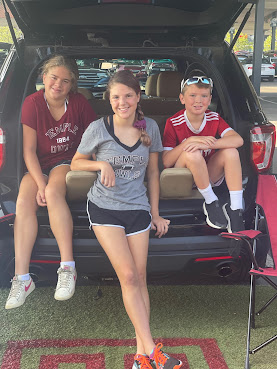 I remember the days when a Friday night was literally the most relaxing night of the week. Work ended. Drinks were poured. Dinner out. Pajamas on the couch with endless binges of bad TV. Books were read. Alarms were not set.

Then the kids came. First little and needing little things; but blessedly going to bed early. Now, big and Fridays are like every other day of week--racing to finish work before someone's game, running to practices, drop off and pick off at social events, preparing for early Saturday wake-ups for practice and setting an alarm.

It is a different season with older children. I am up later. I worry endlessly. There are deeper, longer talks and more complicated problems to unravel (sometimes even more complicated than the problems of recovering from childhood cancer). They need me in much deeper ways than they ever needed me as a baby.

It's harder to get a night out now--so many arrangements must be made--they have responsibilities of their own and need us to get them there. There are projects and tests to study for. They've got stuff and need us.

Friends warned me of this season; but I never really listened. This is the season when my kids--the big, middle and little-really need us present. They are watching us, just like they always have been, but now they are watching us to see what things will be like in future. Lily, so close to adulthood and still our girl, is watching to see how much she can trust us with her heart and her failures and her joys. Chloe, right in the middle, is watching to see what it will be like when she is older like her sister. Nicholas is watching to see just how much he can get away with (and probably secretly hoping we will be elderly by the time he is old enough to get into real trouble).

It is an exhausting season. I am finding it hard to unwind and relax on Fridays--hard to let go of the week of running from place to place, counseling broken hearts, unraveling conflicts and cleaning up little boy messes everywhere. But, I am also finding it hard to imagine this season ending--when the running stops and the broken hearts are counseled by best friends and the conflicts aren't mine to unravel and the little boy isn't so little anymore.

So, I'll take this season and I won't wish it away; because it will go away all on its own.