Oh, Halloween! It is now a wrap!

I adore Halloween--especially all the costuming! When I was a kid, my mother did not take costuming very seriously. Most of my early costumes are truly the reasons why I cannot ever run for public office.

My mother used to try to make me be a ghost year after year with an old sheet and a mask. The result: I liked like a mini Klan member.  Then one year I was an "Indian," and she instructed me to walk around smacking my mouth making how-how-how sounds. (Sorry Native Americans everywhere!). In the last horrifying costume situation, I was a hobo, in a costume that mocked the homeless and those struggling with addiction and mental health.

As a result of my traumatic (and offensive) childhood, I take costuming for my family very seriously!

We plan for months, burn off our fingerprints with hot glue guns (they'll never catch us!, break 100 sewing needles and have learned how to take some random items from Amazon, Walmart and our basement and turn them into amazing costumes (that sometimes malfunction). 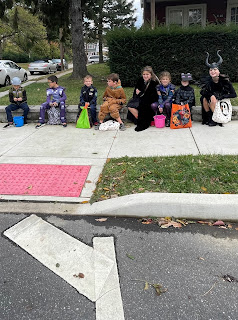 We had a really lovely day, even though it included a few BIG emotional loud discussions over listening, candy, broken hearts and other drama. I am 100-percent certain that the calm family 3 streets over was traumatized by our very open display of emotion in the street in front of their home. (The dad is a minister! He is probably praying for us right now!)

But, as my husband pointed out, it is pretty wonderful that even our 8-year-old son has the words to describe and the desire for us to understand his emotional state.

It takes a lot of emotional intelligence to tell your mother that she's "broken" your "heart because" you "told everyone here about my yelling and shouting and embarrassed me." And by tell, I mean scream and shout like a wild banshee dressed as Scooby Doo at your mother in Shaggy Wig in the street for a large crowd of on-lookers, which include a pastor with calm, sedated children.

Anyway, that 8-year-old skipped out on the last street of trick or treating in order to take a very much needed time out at home.

Meanwhile, another child threw her candy in the street and then her body on a stranger's lawn. The other one was strangely quiet; but I think that is only because I could not hear her and kept my distance, lest we had a triple breakdown situation.

The whole thing makes me laugh now, because really, parenting in the midst of a pandemic and a holiday that requires costumes is really a ridiculous expectation. It is like we are being punked every single year and the producers of the "show" keep upping the ante, to now include street fights and family shouting in the road.

You might be thinking now that I had a stressful day; but really, it was just another day. And any drama was made better by the wonderful neighbors we have--who witnessed the entire thing, did not feel compelled to pray for us and then who I overheard complaining about their own children. It is true that misery loves company, but even more true that costumed people in wigs should always stick together.