We went to renew/apply for passports today. AND I AM EXHAUSTED.

I feel like I was just in court trying to overturn a wrongful conviction of a shoplifter. There was so much preparation, paperwork, rules, confusion and in the end, we won, but no one cares, because it is just a passport.

All of us, minus Mike who renewed his passport a few years ago (because he has a fancy job involving warehouses and an occasional European colleague), needed to get our passports in order. Lily and I had expired ones; Chloe and Nicholas have never left the country (even though they thought they had when we went to Cape Cod, thank you PANDEMIC EDUCATION!). 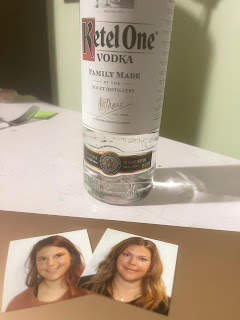 Getting any sort of government identification is extremely difficult, as we all know. Toss in the pandemic and a person like me with a hyphenated name and three children, and it is truly a difficult adventure.

As with all difficult adventures (including cataract surgery of earlier this year), I am here to help! Here are my tips for getting your passport during a pandemic:

A man came in without a mask and was upset they did not have piles of complimentary masks for him to select from. As he continued to babble on maskless, aerosolizing whatever viruses he was carrying and intermittently coughing, the passport greeter kept saying "BOSCOVS," in a monotone voice that suggested she had encountered this once before.

As a sidenote related to Boscovs, we did not eat before we went and were there so long that Mike had to go buy himself a belt at Boscovs.

2.  Make an appointment 18 years   weeks before you plan to travel.

The current wait time for receiving a renewed or new passport is 18 weeks to 18 years. If you choose to expedite your passport, you can cut that time down to 12 months to 12 years. Note: adult passports are only good for 10 years, so hopefully you get it by then. You can attempt some magic by calling your Congresswoman or man, reportedly, but that seems like you'll be on hold and asked lots of personal questions and maybe be placed "on a list." (I am definitely "on a list." I do not recommend it.)

3. You need more checks than ever before!

I never write checks anymore! But when getting a passport, you have to revert to this old-time-y form of payment, so dust off your Looney Tunes checks and bring yourself a sterile pen!

For the four of us, I had to write 4 separate checks and then pay a laundry list of fees with my credit card. I have no idea what I am paying for, exactly, because I was not allowed to ask "too many questions." I think our grand total was slightly less than our mortgage payment.

4. Bring the entire contents of your home, as well as affiliated relatives.

When we arrived, I had several identification documents, but somehow did not have my wallet with my driver's license. Apparently, the other documents were not enough, including my old passport and my middle child saying "THIS IS PATRICIA CARRINGTON-ADKINS, JUST LOOK HER UP!"

So, I had to leave, go home, dump out the contents of every bag in the home to try to find my missing wallet, only to find it on the kitchen counter (where I left it).

Next time, I am bringing my mother, my wallet, my fire proof safe and my elementary school yearbooks (just in case!).

I have a very long four word name. It is my name. I did not name myself! I did, however, opt to hyphenate, but Adkins just adds a little bit to whole thing. The real criminal in my name is Carrington (both proverbially and literally, don't Google us!). I was repeatedly told,  "your name is just so long," and "you do know you have three children." The poor clerk used 4 pens.

We saw several people we knew at our local passport office--friends from town and the crew team and our former (terrifying!) pediatric dentist. These people got to witness our drama; but probably did not notice because they had their own problems. Our former dentist was speaking in a Donald Duck voice and somehow secured his son a passport for Mickey Mouse.

Yet, I am still not even sure I'll get a passport for my ACTUAL REAL LIVE CHILDREN.

I'll keep you posted on the progress of our passports, if we are ever allowed to leave the country and of course, if we are allowed to return!