This evening, after a very long day, I was standing in the dance studio parking lot chatting with a friend, when all of the sudden, a small black bird swooped between us. It was so close, it's feathers brushed my sweatshirt. After it swooped by, it immediately slammed head first into a parked car and died. 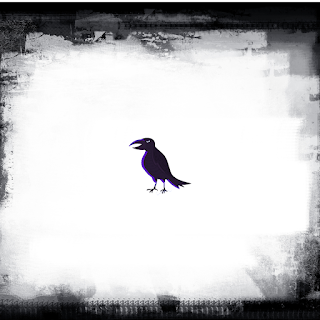 I cannot confirm if the bird was definitely dead. I did not want to get too close, lest it reanimated and pecked my eyes out (I don't have time for eye surgery!). I also briefly entertained the notion that the bird was contagious and somehow this was the start of a new parallel pandemic, some sort of "little black bird" flu.

But, I settled on that this strange, surreal, disturbing event was a sign--the sign of the little black bird!

I am a firm believer in signs (especially when convenient to telling a good story). And this is definitely a sign, right?

My first thought was that this little apocalyptic black bird was a sign that the end was near. Perhaps that September was not going to go quietly, even when there are just a few hours left of this horrible month.

Or maybe, the bird could be providing a dramatic, theatrical performance of what it thinks about September (by sacrificing its life?).

Most likely, if I skim Revelations, I will find an alternate meaning of the sign of the little black bird involving trumpets and brimstone and hailstorms (there was a hailstorm on Monday!) and angels with black feather wings and terrifying faces.

I am too scared to look in there.

And yet another friend suggested I gather the bird and mail it to some of the people on my "dead-to-me" list. But, I think that might be illegal and also have faint notes of mental illness. (This is my friend that would absolutely do anything for me. Like hide a body in a swamp. We've NEVER DONE THIS! It is a metaphor for the depths of our affection!)

Honestly, there is not a good interpretation of the sign of the little black bird. All-in-all, it is a very disturbing event. It is more disturbing than the woman in town who posted on Facebook that she found a cross on her lawn and wondered who it belonged to. (RUN LADY RUN! THEY ARE COMING FOR YOU!)

I think, maybe, it is a reminder, that at any point, you could totally lose control of your ability to fly, scare some already traumatized people in a parking lot and inadvertently kill yourself. So you should, like, look both ways before crossing the street?

I have no idea. I am just going to drink wine and pretend it did not happen while avoiding all mirrors, black cats and ladders.

Happy September 30th, everyone. Watch out for little black birds.