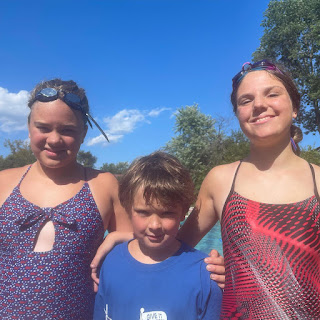 Our family started our summer in recovery from Lily's second shunt failure and revision. When I look back, it seems so long ago and so impossible we were in that place again. Two years ago, we ended summer with a shunt failure and revision. It's hard to ignore that symmetry and the strangeness of having those traumas as starting and ending points of my favorite season.

I don't think there is any particular meaning in this timing or any mystery to unravel for ourselves; but I do know these dates and benchmarks form our family's personal calendar. Everyone has a personal calendar--the one filled with birthdays and death days and anniversaries and milestones and traditions.

I think we spent so much of the summer trying to find our footing while simultaneously avoiding overthinking the whole thing. The kids finished school. Lily was cleared to get her incision wet in the pool (but no rowing or swim team). We went on our first vacation to Cape Cod; then later off to Hershey Park for my birthday weekend; then to the Blue Ridge Mountains for a wedding and mini break and then off to our week in Ocean City, NJ. We had swim team and pool days and tubing and beach days and Wild West City and adventures in-between that kept us filled with so much adventure and memories and joy.

And now here we are, in September.

September is a really hard month on my personal calendar. September 1 marked two years since Lily's first shunt failure. The entire month is Childhood Cancer Awareness Month which demands some intense mental endurance from me as a childhood cancer mom and as a writer for Alex's Lemonade Stand Foundation. September also marks the anniversary of 9/11, a day that was varying degrees of traumatic for all of us. For me, there are the memories of being in Vermont and the fighter jets and the tanks securing the Canadian border and being far from my family. And then later, 9/11 marked the slow march towards death for my father. This year will be 10 years since he died, on September 17. September is also the month my brother choked and then died, on September 23, 4 years ago.

There are minefields and memories everyday. It is such a hard month for me to face.

But, as my Dad told me nearly every single day of my childhood, "life is for the living, Tricia!" He also liked to tell me "to die with my boots on," (a cowboy reference that I adapted for his gravestone). Once, when he was 81 years old and facing bypass surgery, he made me promise over and over again to live my life--he was shouting down the hallway--"live your life! live your life!" Just hours earlier he fretted that my childhood wasn't adventurous enough--and made me promise if I had children, I'd give them weeks at the beach and parks and road trips.

He wasn't sure he would wake up; but he wanted to make sure I stayed awake.

In the summer (and most months of the year). I have no trouble living up to my promise to live my life as fully as humanly possible. It is September that trips me up.

This year, I am going to try my best to do the very opposite of what grief asks of me. Instead of trying to avoid a month, which is unavoidable, I plan to fill my calendar more than it will be filled. I want to fill my cup with the people and the places and the things that give me joy.

And you know what I am truly looking forward to: watching how hard my children work this year at school and sports and dance and life. They are at such incredible ages--the world is opening to each of them in exciting ways and the work ahead is hard and heavy. And I know they will each fail several times this year and there will be hard, hard days. But, it is the work--the living with their boots (cleats, tap shoes, sneakers and oars) on that will be the sweetest piece of this life I can witness.