Having a brother with special needs is a burden.

I hate that I wrote it.

But it is absolutely my truth and if nothing else, I promised myself that when I wrote here, I'd be truthful.

I had a brother with special needs.

It is not that my brother himself was a burden; but his circumstances created burdens in my life. Burdens--those heavy, difficult, unwieldy, slippery clingers--are plunked down on all of us. Being a sister to a man who possessed a myriad of developmental disabilities is a burden that I still carry; even though my brother has been dead for almost 4 years. 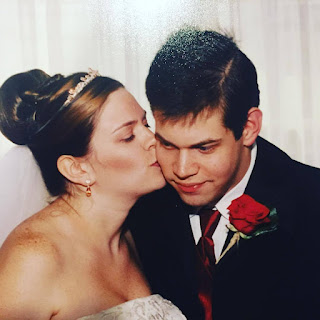 It is a burden to feel forced to explain what a burden it is to have a special needs brother. I don't even have him anymore and still, I am saddled with these heavy weights--the expectations that I would love my brother completely and perfectly or that I would be traditionally successful because he could not be or that I would smile and be brave and strong and sacrifice my own life for his.

And in the end, it was my brother who died. It was 4 years ago today that he choked and so began 8 days of living in-between life and death in the ICU.

There are blessings and burdens worth holding onto because it means I still get to hold onto pieces of my brother.