Tonight, I fell into the rabbit hole of Ancestry.com. I did not mean to do this; but I am very susceptible to any endeavor that involves stalking, discovering, sleuthing and includes DNA or finger prints.

You can blame my father--who worked for a company called Sirchie (which was owned by my Uncle John and previously by my Uncle by marriage Fran Sirchie, who married one of my dad's sisters). When I was a kid, I used to play with finger print powder and crime scene evidence collection kits for fun. Then, my Dad and I would watch Murder She Wrote or Perry Mason or my absolute favorite, Mystery! on PBS (they had the most amazing opening animation, which reminds me so much of the opening of Only Murders in the Building. I'll stop now, I am getting distracted!).

Anyway, my friend Jackie mentioned she got her DNA results back and then I was intrigued by hers and then I remembered mine and here I am several hours later, many generations deep into the mystery of my heritage. (Note: I don't have several hours, but I am unable to stop myself.) My father was one of 9--the oldest of the Philadelphia Carringtons. (Sounds fancy, right! Well the Carringtons are not actually fancy, although we all pretend to be because everyone tells us we have a fancy name.)

However,  a cousin of mine has 10 kids in my dad's generation, plus one more kid belonging just to my grandmother. My cousin has his Family Tree on total lockdown and I cannot see what this is or what is happening and if I have more secret relatives. I've messaged him and he will probably ignore me, as many of my first cousins tend to do, because I am literally the age of their children and it makes for a lot of confusion.

But, of course, I sort of love the confusion and the intrigue! Are you following anything I am saying? I sure hope so, because I am totally going off on 12 tangents here, which is exactly what happens on Ancestry! It is like this insane escape room mixed with a trunk of old photos in your grandmothers attic that contains  clues dropped everywhere and as soon as you think you've found the answer to who you are, you find some 1/2 first cousin in Australia named Sonja and you message them AND THEY DO NOT WRITE BACK IMMEDIATELY and suddenly you are friending everyone named Sonja on Facebook and have completely forgotten why you were on Ancestry.com in the first place. 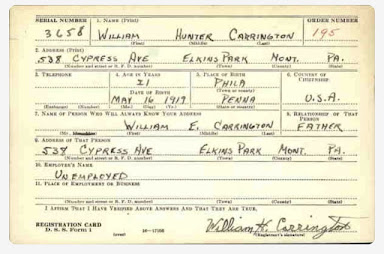 It's an addicting place, friends.

Anyway, I did discover a few things which are simultaneously FULL of meaning and absolutely meaningless and 100-percent so amazing!

My Dad totally LIED about his birth year on his draft card for World War II.  He wrote 1919 and he was definitely born in 1920 (I have his fancy silver birth spoon with the dates and times engraved in it). I was baffled--because looking at the copy of his draft card, it is his handwriting, I'd recognize it anywhere!  I did some investigating!

I know from all his stories (I used to interrogate him at the dinner table), that he was desperate to be drafted and in 1940, the United States instituted the Selective Training and Service Act required all men between the ages of 21 and 45 to register for the draft. My Dad was just 20 in 1940. So he lied to get to war. Although, I think he could have been younger and registered, but I'd bet 20-year-old Bill Carrington did not understand that. He never told me about this particular "go to war" scheme. He did tell me about others--he tried to hide his deaf ear (the result of a childhood ear infection that did not heal, despite my grandmother's cult faith healing prayers, story for another day!); he tried to hitchhike to Canada to join the Royal Canadian Air Force and then, in the end, he became a Merchant Marine and served that way. I found one of the ship manifests from October 1943, when he docked in Seattle, Washington, after sailing from Aruba (and then through the Panama Canal). He sailed on the Perote, a tanker. It was commissioned in June 1943, so my Dad would have been among the first crew to sail. Here's a picture of the ship: 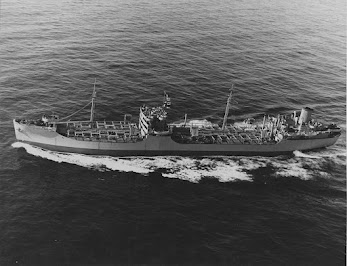 And I remember my Dad talking about this trip--the new ship, the canal, the islands and Washington. It's like I am back at the dining room table, giving him ingestion and grilling him for all the facts after dinner.

I also discovered that my Grandmother Carrington died on March 13, 1996. I remember when she died--but I did not remember the exact day. Lily was born 10 years later on the same day. Dates are funny, aren't they?