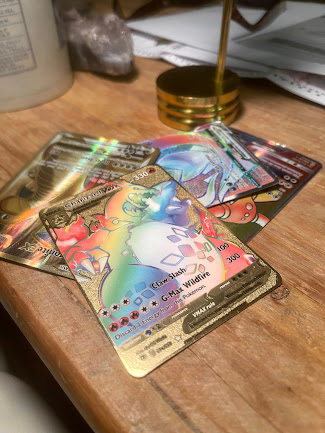 Pokemon fever has taken over my son.

And I don't even know what Pokemon is and I've had plenty of chances to figure it out. Lily briefly had the fever in elementary school, as did her classmates. It got so bad that there were fights on the playground and robberies on the walk home and the school had to ban Pokemon cards. At the time, I thought this was distinctly a Lindenwold problem. BUT now we live in Haddon Township, which is like Stars Hollow and there are no robberies except for the stealing of political signs and the occasional bike, and the Pokemon children are the same:

Confusing, combative and very excitable about the cards with little creatures  on them.

What is Pokemon? I don't even know if Pokemon is plural and if I should be asking what are Pokemon?

I find it all completely bizarre.

This is what I've gathered:

Nicholas has approximately 4,502,204 Pokemon cards that he keeps in a binder. He reorganizes the binder constantly. We buy a pack every time we visit Target. He ordered them via Alexa and they arrive in bubble wrap. The cards all look the same, so there is no rhyme or reason to the organization.

2. There is math involved.

When you play Pokemon you seem to add up numbers and I guess since addition is math, there is a STEM emphasis in the game. However, if you are like my son you might simply add up the numbers wrong OR demand that a parent adds the numbers for you (and then threaten you if the numbers don't align with your personal vision.)

3. There is a special language, which is what I think "martian" would sound like.

My son, who is not the best at sight words, is fluent in this Pokemon "martian" language. Most of the creatures seem to be named after the noise a sneeze makes.

4. Apparently you trade these cards.

The cards all look the same, so I am not sure how trading works. Apparently you trade cards as part of socializing with your friends at school. Then you have a HUGE, GIGANTIC, LOUD, argument over the trade and shout things like: "YOU RIPPED ME OFF' "THAT IS FROM THE DOLLAR STORE IT IS A FAKE" and "YOU ARE A CON ARTIST." Everyone is amped up on juice boxes and pizza day in the cafeteria and they have no idea how to control themselves.

5. There are ULTRA RARES and FAKES.

Several times, Nicholas has told me that someone scammed him with a fake. Or that he has an ultra rare and no one believes him. He does have a card that seems to be made of fool's gold. I imagine it is a bit like the early days of currency--when people were trading slightly-off wooden nickels and ripping off their neighbors.

6. The cards make everyone cry.

My son cries when he loses a card. My daughters sob when he gets to buy a pack of cards at Target and they get nothing and life isn't fair. I cry when they cry. Other children cry when they are scammed. The Pokemon never seem to cry because they are not REAL.

7. The cards end up on the floor, with everything else "important," "beloved," and "my favorite."

Even after all the tears, organization and trading, the Pokemon cards will just end on the floor, shoved in the couch cushions, slipped under the rugs and in the trash can.