What I Know about Raising Teenager Girls (Day 222) 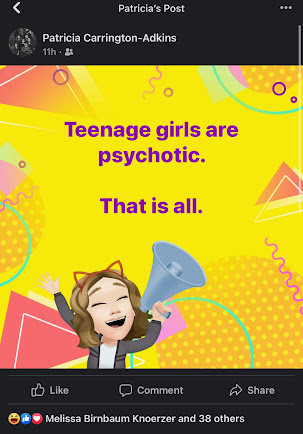 Earlier today, after a particularly trying 37 minutes, I mentioned on Facebook that teenage girls are psychotic.

Note: I know it was 37 minutes because I was staring at the time on my laptop while my teenager screamed (both words and animal sounds) over a basket of laundry. The almost-teenager kept screaming:"DO YOU WANT ME TO SCREAM TOO?!"

Anyway, my post resonated with mothers (and fathers) everywhere, because this widespread situation is some sort of epic, eternal pandemic. Like the viral pandemic we find ourselves living in,  I am very certain there are several variants (all nasty!). I am also certain that if a vaccine was available to protect me from my teenager and almost-teenager’s wrath, that I would take it.

I would not even care if it ever made it to clinical trial!

I am only a couple years into the first girl's teenage years. In less than 6 months, I'll have two teenage girls. I believe I'll be free of teenage girls in my house around 2030; but of course, at that point my son might be dating teenage girls; so I won't be free until 2033-ish.

Anyway, I have begun to learn a few things during my dark walk in the teenage girl years. Here's what I know:

1. You won't remember the truth of your own past teenage psychosis.

I do recall bits and pieces of my teenage girl psychosis. I yelled and sobbed all the time. I was not unhappy, I simply hated everyone. And it wasn't actually that I hated everyone. I loved some people, until I hated them. In other words, I had a touch of borderline personality disorder (maybe?) and was very feral. Regardless of who I was, I don't fully remember, so I cannot even tap into that past experience to navigate my girls.

Before the 37 minute laundry basket episode, I asked my 15 year old is she wanted a toasted bagel.

"YOU DON'T UNDERSTAND ME AND YOU ALWAYS TAKE HIS SIDE."

I am not sure who "his" is. I asked (like was she referring to the toaster?) and she threw a napkin, which did not make a sound, so she picked it up and threw it again and then stomped away shouting, "WHY DID YOU BUY CHEAP NAPKINS?'

3. You will make the bagel anyway.

After this episode, I made the bagel anyway. My thinking was that maybe she was very hungry and this was causing her delusions and rage. Of course, she ate the bagel, alone, on the porch, "because' she needed "to get away from the yelling."

Note: she was the only one yelling. WHY DID I MAKE HER THE BAGEL?

4. Their wrath is contagious.

After this, my 8 year old son was screaming and crying uncontrollably while saying he hated me. Note: he had already had his bagel! Anyway, I began yelling, which was obviously TOTALLY EFFECTIVE AND MASTER PARENTING. But, I lost control of myself, because teenage girl wrath is contagious! A pandemic!!!

5. You will find yourself repeating "I love her," to yourself like someone walking the plank and praying for an angel to catch you before you fall into the jaws of a crocodile.

You might think this is a dramatic comparison, but friends--it is not dramatic enough. When your feral teenage girl is screaming at you about a mystery "him" and alternating this nonsense with animal screams, you need to remember that you LOVE AND BIRTHED THIS CHILD.

6. Anyone who tells you that their teenager is not feral is a liar OR IN BIG TROUBLE.

Listen, everyone tells me how great and polite my 15-year-old is to the outside world. And that is wonderful. BUT if I told you, "Oh! She is so nice to me, all the time! I've never heard her scream about cheap napkins," then I WOULD BE A LIAR LIAR PANTS ON FIRE! Or worst, she'd be doing horrible, quiet psychotic things, like cutting holes in my clothing or posting blogs MOCKING ME.