The Most Middle Child Thing (Day 225)

It is Middle Child Day, the best day of year!!

(And the day when I air a little bit of the dirty family laundry!)

Just the other day, my long time friend and former neighbor and original Daisy-troop co-leader, responded to a text in which I referenced my sister and said:

My father had a family before marrying my mom. My older sister is 25 years older than me. She did not live with us full time; but would often show up unannounced with her tiny dog, gorgeous long hair (she hair was epic then!)  and whatever boyfriend she was running cons with. Then she'd stay a while and everyone was exhausted and missing their valuables when she finally left.

She taught me a lot about how to close a sale, how to get people to open their wallets and how to overcome your fears of asking for money (don't ask! just take it!). 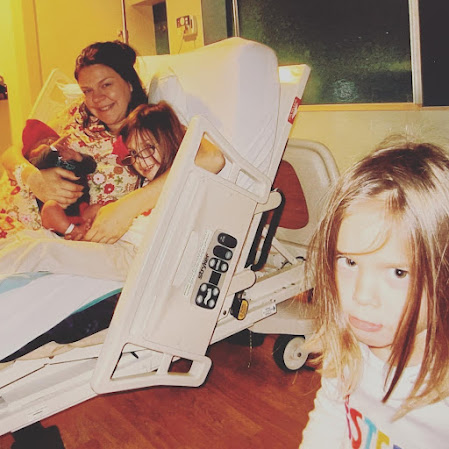 And then, of course, I had my younger brother, David with all his issues and challenges, none of which that were his fault, of course. But he presented another set of learning opportunities--how to be patient, how to advocate and how to handle playground bullies.

On paper, I was the most typical one. My Grammy used to tell me that I was "the hope for the Carrington Family," which was a lot of pressure. I am not sure she was saying this as a compliment (Grammy was NOT complimentary, except when she was going through my yearbook and picking out potential husbands for me based on their teeth). I was just the only one who could talk and who did not steal.

My Dad used to tell me that a lot of mistakes were made with Beth (my sister). But, then he'd hold me accountable to the same rules he had for Beth (no driver's license until 18! But, of course, I could charm my way into getting rides with anyone, thanks to those early con lessons). I found this really annoying and sometimes I suspect he said it was the rule he had for Beth just to stop me from arguing.

Then. when my brother would accomplish the simplest thing, which for him was probably huge and complex, my Dad would be so excited that he'd practically throw a parade and alert the authorities (a lot of his friends in those days were cops, he sold police equipment). I'd get a 98-percent on a math test and he'd ask why it wasn't a 100-percent.

See, so much pressure!

Now, I am pretty much an only child. Beth has gone off to wherever an aging con artist whose hair and charm has waned goes. David is simply gone. I miss that short time of my childhood when the three of us would be together. Those moments were few. And truly, my sister was rotten. But, there were moments when Bill Carrington's three kids were all at home at 2181 Wayne Drive and I felt, well, the most like myself--the middle child.

I don't think I have any pictures of the three of us together. I know there is one of Beth and I with my Grammy somewhere. I remember my Nana taking it at her house in Cherry HIl. (My maternal grandparents did not abide Beth; but my Nana would never fail at her hostess and photography duties!)

When I look at my own middle child--Chloe--I see all those things I used to feel with a big sister on one side and a little brother on the other. Her siblings are thankfully pretty regular; even with childhood cancer in our lives. She gets to be with them everyday. Thus far, no one is emerging as a master criminal. But, she is held to the rules we set for Lily and does have to endure the endless inequities presented by having a baby brother.

As a result, Chloe is both volatile (her temper is legendary) and also a natural problem solver. She is mostly all bark--she does not have time for the bite--because as the middle child, she has to be a leader. She has to lead up (to Lily!) and down (to Nicholas). It's a hard job being in the middle of it all in the family.

But, I personally think it is the best spot to be born--right in the middle of all the crazy love and chaos.