My first cat Pilot was a total jerk. Actually he was a bastard. I cannot sugar coat it! He was terrifying. After I had Lily, he would stalk me around the house, as if he was a lion and I was an antelope. And then, without giving any warning, he'd leap at me and wrap his entire body around my arm or leg and bite me.

I imagine this is what it is like to live on the savannah in Africa. And I decided I did not want to live on the savannah in Africa. But, alas, I loved the little jerk--he was so sweet to the girls when they were little and really only wanted to kill me, so I just used the opportunity to sharpen my senses and often walked around with a broom. If I heard the rustle of the wind, as Pilot leapt for my arm, I could sometimes knock him away with the broom before he took hold.

Anyway, Pilot died (of old age). Rest in Peace, I guess. (I mean for sure. I don't want him haunting me!)

After Pilot died, all Lily talked about was getting a cat. She started a cat fund--saving birthday money (and I suspect, stealing from our wallets, but I cannot confirm). She was really serious. Then we planned to move and told her if she had the money, once we moved we could get a cat.

We were in the house approximately one week, when Rosie Blue joined our family. We had stopped in PetSmart just to look around and all the rescue kittens were there. Lily immediately saw Rosie--the cat not around the other cats and the cat that eluded capture by the PetSmart employee. Lily, though, was able to reach right in and grab her. And that was that. Rosie was ours.

This cat spent nearly a year hiding from everyone but Lily. She is endlessly suspicious of the dog, who barely glances her way (and if anything is terrified of her).  Over the last 5 years, she's only come to me when she wants food. No one picks up Rosie (except for Lily, who is her cat mother) and sometimes Chloe (who hunts Rosie down and swoops in when the cat is drowsy). But, lately, the cat likes me.

I fear she likes me because she is some sort of magic medical cat that is sniffing a rare disease and alerting me. I saw this on 60 minutes once. I think it was a dog not a cat. But, either way, I also fear mentioning this to my doctor at my next physical because I do not need them to add anymore notes to the "mental health" column in my file!

Now that the cat likes me, I cannot sit on the couch without her all over me. She puts her tail in my face, her butt in the air and is constantly licking my legs. She is always rubbing her head against me for a scratch behind her ears and even let's me rub her belly. I am not allowed to pick her up though (She likes to be in control) And she is very suspicious of taking selfies (probably has a secret past or something). This is the best picture I could get: 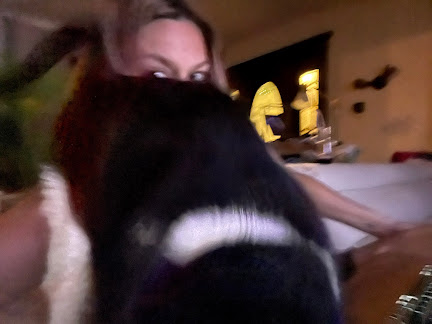 But take my word for it: she is adorable. She has never bitten or stalked me. If anything, it seems she is constantly protecting me. She's sent an angry meow to Nicholas on several occasions while I was writing and he began demanding snacks and pokemon cards.

But, now that the cat likes me, I literally cannot sit on the couch alone, ever. It's like being under house arrest and my jailer is an 8 pound little black and white cat with EYES EVERYWHERE.

Anyway, I've got to run because she is currently endlessly nudging my arm and telling me it is time to shut this blog down.