Well, it's another exciting week in my neck of the woods!

This week kicked off with a hornet's nest mystery.

Who doesn't love a good intrigue that involves insects that one might possess a deathly allergy to?!

On Monday, a walker (not like "A WALKER" from the Walking Dead, but a person who reportedly walks on the regular) in my neighborhood reported seeing a hornet's nest nearby our park and nearish the corner that my property occupies. Beyond a zoomed in photo of the hornet's nest in the tree, there were no further clues!

Instead of providing an exact location or a photo that put the hornet's nest location in context, the walker/hornet first reporter just suggested everyone be safe. WELL WHO CAN BE SAFE WHEN KILLER HORNETS ARE ON THE LOOSE?

So, instead of anyone immediately asking the hornet nest location; the neighborhood came out in full force to investigate. Several people were out looking upwards to the heavens for the hornet's nest. Some had dogs; one had a dog which pooped near my garden (just out of the reach of our Ring camera; with only the Spotted Lantern Flies as witnesses!).

Those without dogs were people I'd never seen before! It reminded me of when our park was a Pokemon Spot and strangers would wander around with their cell phones attempting to capture(?) imaginary virtual cartoons with funny, illogical names that sound like the noise one makes while sneezing.

It was a diverse group of people with varied hobbies and occupations. And of course, I joined them! I am deathly allergic to insect stings and the Epi pen we have is both missing and expired and I used all the Benadryl to make my children sleep, so I absolutely had to go out in open toed shoes to find and confront killer hornets! 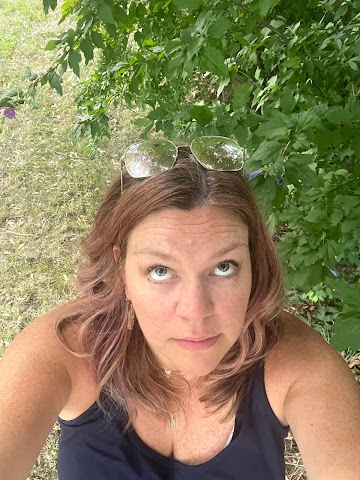 I mean if not ME then WHO? (a licensed professional? Pfft!)

Anyway, we all had one thing in common:

We would have sore necks by Wednesday.

One of the hornet investigators was so focused on his search that he was almost hit by a car as he wandered into the street. Another person tripped over a curb, but remained upright (I think they have a gymnastics background with balance like that!). Four people wandered into my yard--two of the four complained about the dog poop (I KNOW PEOPLE I KNOW!). One of the four scolded me for allowing my children "to pick poisonous berries."

I am going to stop right here because:

1. I don't "allow" my children to do anything. They do what they do. If you think you can control them, by all means: ENJOY!

2. BUT most important: our berries are not even berries! They are cherries!

And of course, they are not poisonous! But, I might let the hornet's nests folk believe that. I don't need them getting hungry. I am already fighting the birds non-stop for our black cherries!

Anyway, the fourth person killed a spotted lantern fly. I invited this one back!

While the walkers (not zombies, just people who walk. This is an actual account of actual events not some dark zombie story!) were congregating in our yard and growing hungry, my husband and other neighbors were taking to the internet to try to get more details about the hornet's nest location. An additional photo was posted by another person--this one super high quality, really like professional National Geographic quality--but again, no clues to the exact location! Finally someone offered to "PM" my husband with intel, which frankly annoyed me--WHAT'S THE BIG SECRET AND STOP PMing OR WHATEVER MY HUSBAND LADY!?!

Anyway, the PMing or whatever went on and resulted in good news:

The hornet's nest is not in our poisonous berry tree nor is it in any of our trees! It is not in a tree by the neighborhood playground, dangling above little tikes heads. Nor is it near the part where everyone walks their dogs. And it is not in the Civil War cemetery threatening the dead! It is dangling right over the road. You can even see all the killer hornets buzz in and out, going out to do whatever they do (I pray it is to kill Spotted Lantern Flies and not like chipmunks). It does not look super secure; but, hey, who am I to judge the craftsmanship of hornets?

Apparently there is one rational person in the neighborhood, who called someone who will (maybe, if there is not another outdoor emergency in town) come out and take a look/kill those hornet's with the full strength of the Haddon Township Public Works behind it.

I am not sure how many people work for the HTPW, but I imagine it is definitely, at least, four. And listen HTPW, my berries are POISONOUS, stay away.