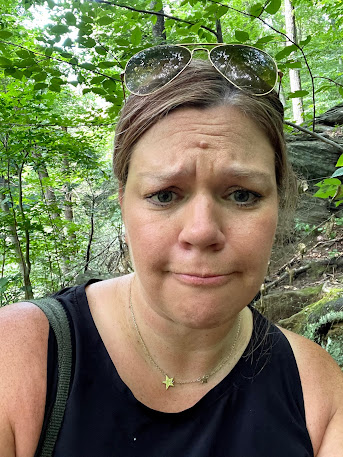 Today, we accidentally went rock climbing! It was exhilarating and at times, I really could picture my death.

Our latest adventure took us to Wissahickon Valley Park (which is nestled up against Fairmount Park). Despite being nearly lifelong Philadelphia-areans, none of us had been there. Since the weather did not feel like pool or beach weather but we had to leave the house (lest we fight all day over things like YouTube and the dishwasher and pickling), I provided my family with two options:

the movies to watch Jungle Cruise or hiking!

It was no surprise when my adventurous, fit family selected hiking! So off we went over the bridge and through the traffic to Wissahickon Park!

I had a plan--we'd hike along Forbidden Drive (which is an odd name for a stroller friendly trail!).  We got there and everyone thought going left looked lame, so we went right. This split decision would change our lives!

We ended up on the Orange Trail and while some of it was "hiking," other parts were "bouldering," "scrambling," "balancing on one foot," "praying" and of course, "yelling" while "crying."

There was one time, about 1/10 of a mile in when I suggested that we "turn back immediately," but everyone in my family said that would be "giving up" and "too hard." So, we "bouldered" and soldiered on and had yet another extreme adventure that we were completely unprepared for!

But, dear friends, I don't ever want you to be ill-prepared for the Wissahickon, so here are my tips for all my extreme friends and their equally extreme families:

1. It is nature's obstacle course!

On the Wissahickon, you are immediately launched into nature's obstacle course! There are cliffs (don't fall!), sheer rock walls (you definitely won't have equipment, so let your faith carry you up!), mud (don't slip!) and bugs (more on this later! GOD BLESS!).

2. Nothing is marked, so take "the path of least resistance."

There were occasional trail markers, but really it was mostly a guessing game. I think we were on the Orange trail, but really we could have been on the Double Black Diamond at the ski resort. Who knows?

We just sent our trusty brave boy, who cannot follow directions and does not take safety seriously ahead as our trail scout. Then, we went wherever nature took us!

3. When you go "Orange," you will see and become enraged by the "Green."

Along the (assumed) Orange rock wall/trail, there are several spots where you can view the Wissahickon creek, as well as the Forbidden Drive "Green" trail on the other side. The Green people are just going about their day and they are not screaming or praying or taking selfie videos detailing their final funeral instructions.

4. YOU WILL MAKE IT (most likely. no guarantees!)

Look, I am not writing this from the (assumed) Orange Trail, so obviously I made it! It was touch and go on several occasions. At one point, my husband suggested we ford the creek near the damn. Thankfully, some other college boys had the same idea and failed right in front of us (hope you are okay!). We continued on the (assumed) Orange Trail, made it to the Green and got to experience the carefree lifestyle we witnessed from atop the cliffs!

5. The trail is haunted!

As a special pre-Halloween season bonus, the (assumed) Orange trail is haunted! We saw three people, who certainly did not survive their trail walk and we can only assume they are ghosts reliving their terrible deaths! First, was the "bicyclist ghost," who clearly died when riding a bike on and down rock walls and over cliffs! Second, was the "fitness enthusiast ghost," who died when they attempted to run up a rock wall adjacent to a cliff (everyone knows you have to crawl on all-fours while weeping!). Third, was "flip flop lady walking two pugs ghost," and I think this one is self explanatory!

You will think these are ACTUAL morons on the trail, but they are simply the ghosts of morons! Spooky!

6. Stop and take some pictures!

Yes, it is gorgeous in the park with so many amazing rock formations, cliffs, water features and flora to experience! (Also fauna! There were VERY LARGE DUCKS that sounded like bears splashing in creek below the cliff.) Definitely take some pictures for your Instagram! But more importantly, take some pictures that you can share with emergency rescue! Perhaps they will be able to recognize the rock behind your head and extract you more swiftly!

7. Once you reach the bridge, cross over (to the Green Trail! Or the other side if you are a ghost!).

The (assumed) Orange trail goes on for what appears to be many, many miles. Once you reach the Bridge, CROSS IT! You will be tempted to kiss it, but DO NOT UNDER ANY CIRCUMSTANCES TOUCH IT OR KISS IT! It is protected by two very spiders and approximately 2 billion caterpillar/worms. (see below). JUST RUN to the GREEN light  and enjoy the natural beauty of the Wissahickon! 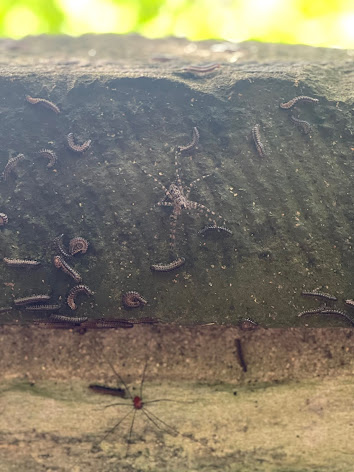