I often come to this blog completely and utterly defeated by motherhood. It goes like this: I have a grand idea for a post and spend the day thinking about it, rewriting it and perfecting it in my head.

Then the evening hits and something defeats me. Usually I am defeated by the heavy, impossible lift of motherhood-- a teenager with teenage issues, a middle tween with middle tween issues and an 8 year old with his own 8 year old boy issues. My own work and housework and garden and mother (with something always broken) and pets and husband and school plans and vacation unpacking and packing and lists and planning and figuring out what everyone will eat at every moment and arranging fall sports and dance and activity schedules and planning and thinking, all take up so much space. 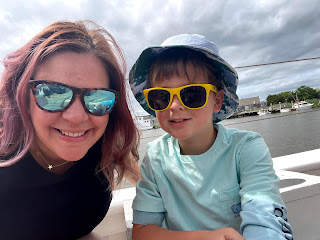 It's heavy. Somedays, my arms give out.

When this boiling pot of issues boils over--it is almost always at night--they are tired like I am and just can't take it anymore.

I honestly have no idea what to do. But, I do know that in the moment the pot boils over my grand writing ideas suddenly feel completely fraudulent. Like how could I possibly authentically write about anything other than the reality happening all around me. It is this reality that is demanding my attention like a siren that won't go off--try as I might to move away from it, I cannot. It is simply too loud.

Tonight, the defeat came first at dinner when my teenager brought her dinner guest "attitude" with her. (Attitude goes with her everywhere!) Then, came my own irritation at the mess made when eating dinner (which is ridiculous, we can clean up dinner!) And then came the boiling point: my son wanted ice water. There was no more ice. Complete and utter hysteria followed. He kept saying, "Mommy, I cannot get it out of my head. I just want to be mad, mad, mad."

It went on. And on. And then 30 minutes in, suddenly, he is telling me that people who do bad things should never feel shame. And he believes he should help prisoners in jail know they should not feel shame. And that shame just makes so angry.

He is 8. Where did this all come from?

Frankly, as much as I hated his ice water tantrum (It is so ridiculous and entitled!). I cannot argue with his point: shame makes all of us angry.

And I think, he was pretty ashamed of having a total breakdown over ice water; but he was committed and decided he could not turn back, creating more shame. It breaks my heart to watch him so visibly struggle with processing his big emotions. Once he is in the thick of it, there is nothing I can do to help. No amount of threats or punishment or stern voices stops it. Even if he stops audibly shouting, he turns inwards-stomping and acting out and just so mad, mad, mad.

And I guess tonight, as I discovered, feeling shame.

I can say that I am really proud of him to sharing how he feels. And there is a tiny part of me that feels shame for sharing his tantrum. But, as I told my son: you need to tell shame to get behind you. Shame has no place in moving us forward. Shame is the noise that stops you from choosing good things: like taking responsibility and forgiving yourself and giving up the rage.