Back to School Shopping with Three Children (Day 231)

Friends, there was a scene at the Cherry Hill Mall this afternoon.

My son specifically told me I was not allowed to write about the incident. But, I will not be bullied (anymore than I already have been!) by an almost third grader.

I have to speak out! Perhaps my courage will help other parents who are back to school shopping.

Picture it, it is 4pm. We've had a lovely stroll through Nordstrom, picking up some items. We've are in the happiest place on earth! And everyone who works in Nordstrom is literally there to make sure you are happy! Your son delights in Vineyard Vines! Your teenage daughter finds a rack of shirts that are discounted because they are cropped and literally only half a shirt. Your middle daughter is delighted that she's found her dream backpack and a special necklace for the first day of school. And you, you, finally have a dress and shoes for a wedding.

Then, you sit down with your boujee lattes and lemonades, unmask and laugh together! Like this: 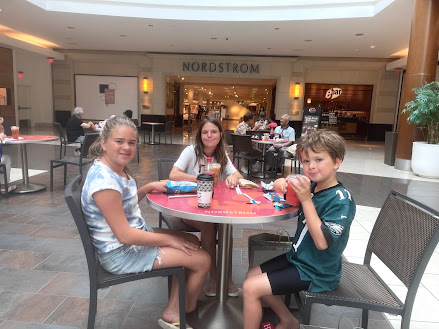 But, then friends, you leave the cradle of Nordy's and you enter the danger zone:

THE REGULAR MALL WITH THREE CHILDREN.

It is almost like entering another dimension and everyone becomes a different, intolerable person. Your teenage daughter is irate you are not going directly to Hot Topic (for more partial shirts and incense). Your son begins demanding "boy stores and toys." Your middle daughter begins trying to rationalize with everyone and then gives up, growling.

But you solider on! The children need pants! And well, it ends with one child crawling on the floor yelling about how "society is purposely discriminating against young children by not providing them the opportunity to earn LOTS OF MONEY LIKE YOU."

I am sure you get the picture. So before you are tempted to take your brood to the mall (or even to Wawa) here's what to expect:

1. Your children will become math geniuses.

During the school year, it sometimes takes my children approximately 6 hours to complete one math problem.  But at the mall, they suddenly can do complex calculations in record time. They can add up the exact amount you spent on their sibling and then even tell you the ACTUAL PERCENTAGE more you spent on their sister. They can do this while also throwing around underwear in Pink and complaining that everything is "ugly."

2. They will stage protests.

Inspired by the Boston Tea Party, your children will become masters at letting retailers know how much they dislike their selection. They will root through bins and racks, dumping what is unacceptable on the floor, as if they are dumping tea into the harbor. You will scurry about cleaning up their chaos, apologizing and explaining that you are just the babysitter and these are not your children.

3. They will become weak.

After all all the physical looting and protesting, your children will no longer be able to lift a 2 pound bag. Their arms will cease to work. YOU WILL CARRY EVERYTHING and at some point, you might be carrying them. The good news: you can skip your core and arm workout for the day.

4. They will suddenly be interested in their earning potential.

As mentioned early, my son became very interested in his earning potential. He wanted $180 sneakers (probably made by children in a factory) and lost his mind when those sneakers were not an option. He accused me of "taking all the jobs for myself," and his sisters of blackballing him in the pet sitting/housesitting/babysitting circles. One of my daughters offered him $5 to be quiet and he rejected it, screaming "I AM WORTH MORE THAN THAT PAPER BILL SISSIE!"

5. Someone will crawl on the floor.

This might be you (see #3). But, today this was my son. He was so emotionally broken from the sneakers and his political protest and his demands to allow children to labor in jobs for equal pay that he could no longer walk. So he crawled. He crawled on that mall floor shouting about sneakers and injustice. He did it and now he might have a parasite or flesh eating bacteria or something else.

Happy Back to School Shopping Friends! Cheers to online shopping and sending them to school in their old, ill-fitting clothes with stains.