What to Expect When Tubing in New Jersey (With 5 Children, some of whom that don't belong to you and others who don't listen) (Day 201)

Summer is all about adventuring! Since my kids were little, I've loved planning some fun weekday adventures. We've gone to Storybook Land, our favorite place on earth Wild West City, Fortescue, tubing in my former stomping grounds on the Delaware River and today, we went on the ultimate adventure:

Tubing in New Jersey at the Winding River Campground! 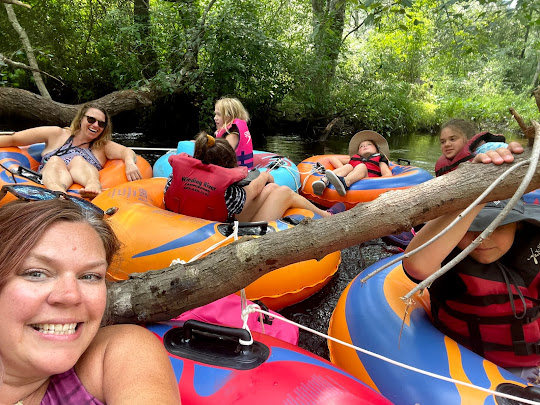 In fact, a bearded man with a van no one should ever get into, will just drop you off and point at the river and say, just get in! That's it! There is no tubing concierge or working seat belts! It's rustic!

Today, this adventure was brought to you by two very, daring, brave, sometimes fool-hearty, but always very funny mothers, their combined four children, plus one bonus child! We had an epic adventure. Sure, every part of my body hurts and yes, three things died on that river (more on that later. It wasn't a child! What is wrong with you for thinking that???) and yes, there was trauma involving the "PRICKLIES" (also more on this later) and there was a kayak rescue (also more on this one), but honestly, I'd go back (in a year, like not anytime soon) and I cannot stop laughing at random times.

The real hero of the day was the waterproof floating bag that I ordered at 10pm on Sunday and arrived by 7am today! This bag stayed tethered to our tubes, never drifted, did not have to be rescued, never complained and legit never got a drop inside! It's like a miracle!

Anyway, I love chaos like this! It is the best kind! In fact, the chaos both increased my gray hairs and my smile lines. (You know how blessings and curses are all mixed together.).

Here's what to expect with tubing in New Jersey with children, some of whom that don't belong to you and others who don't listen):

1. You need to prepare for your trip in advance!

PEOPLE! Tubing in NJ is an extreme wilderness sport. Preparation is key! I recommend ordering everything you need at 10pm the night before you leave on Amazon Prime. There is an amazing selection of items you can get delivered by 7am the next morning, including:

rope (for tying your tubes together and lassoing fallen trees and tying up any river bandits, not that we saw any, but you never know!)

waterproof phone cases (because you have to document everything, but know you cannot make a call because there is no signal on the GREAT (questionable, btw) Egg Harbor River. )

a waterproof bag (the hero of everything!)

water shoes (the bottom of the GREAT(questionable, btw) Egg Harbor River is basically the pointiest, scariest, darkness, most twig covered place on earth. you cannot walk on it without support!)

Your other supplies--bathing suits, etc--you hopefully already have! Food and water, well use the WAWA app like a real Jersey mom and toss those drinks in your waterproof bag!

2. Be sure to tie all 7 tubes together to up the ante on adventure.

Listen. one tube can glide down the river like it's nothing. Seven tubes get stuck, require advanced maneuvers and become caught on tree trunks placed randomly in the middle of river, like the river is in charge or something. This makes everything more fun! Sure, someone (named Nicholas) will cause another person's tube to flip (named Connie) and that will be that person's worst nightmare.

Just plan to have your arms ready for a hug (and ready to detangle ropes from trees).

3. Be prepared for one child to be unable to sit still (it is the child who is unable to listen).

One child (named Nicholas, the same one who flipped Connie's tube) will be unable to sit still or properly in their tube. You will hear yourself say repeatedly, "HOLD ON TO THE BLACK HANDLES . SIT ONE WAY. JUST ONE WAY. STOP CHANGING POSITION." By repeatedly, I mean at least 457 times. No matter what you say, they will not hold onto the black handles. They also will not sit one way; not even just one way. And they definitely will not stop changing position.

They will fall in repeatedly, become hysterical, require a rescue and then. . .well number 4:

4. Someone will lose a tube that will begin floating backwards to escape you, because it's had enough.

That's right! Even the tubes will be sick of the child who is unable to sit still. We lost a tube. Then we tried to get the tube and it began floating upstream, as if being summoned by someone with magic powers. We had several nonsensical ideas on how to get back. Lily tried to freestyle swim back, but the current was so strong that she was matching the current and staying in one place, like she was in one of those fancy endless pools. My mom-partner-in-crime Carrie held onto the tree (alternating arms to keep the strength training balanced!) for a good 13 minutes.

5. Strangers will save you and scare you.

After 13 minutes of arm exercises (Carrie is very dedicated to physical fitness!), some elderly, very tanned strangers were able to rescue our tube. They did laugh at us  along with us. Later, when I was stuck in prickly vine area with three of the children, a kayaker had to send me her paddle and then pull us out of the Disney-like evil forest.

As for the scaring part: there is a horrible man who kayaks by and tells the children there are crocodiles in the river. HE IS  LIAR THIS IS NOT EVEN THE RIGHT HEMISPHERE FOR CROCODILES. Of course, the children do not care about hemispheres or reality and they will scream.

Children will not die! You will not die! But your cell phone battery will die (because you take too many pictures and videos), the signal is terrible along the GREAT (questionable, btw) Egg Harbor River, causing your phone to search endlessly for a ping and because it takes about 6 hours to leisurely float (while getting stuck in the pricklies, falling out of your tube and performing river rescues) back to your car.

You also might lose your pants. Lily's bathing suit at one point became stuck on a stick underwater and we had to rescue her. her pants remained mostly on, but there are a few rips.

Good thing it is the Athleta summer sale! Shopping (and Jesus!) fixes everything!

7. Besides crocodiles (thanks stranger!), many things will cause screaming.

As I mentioned, the pricklies (these are vines with thorns, as well large holly trees) will cause terror and screaming amongst everyone young and old. I lost count of the number of times the current sent us slamming into the pricklies. There are other things that might cause screaming: logs in the river (causing someone to scream "Butt Alert" and then you need to lift your butt up), tree branches ("cornea alert," which requires you to duck and cover), water bugs ("THERE IS A SPIDER," note it is never a spider. it is a water bug, who also wants to scream "THERE IS A PERSON"), watch the tree (which requires the tuber to lean back as if in an aqua limbo game and pray they can flatten enough) and going the wrong way (which included one dead end and several episodes in the river/tree branches/pricklie/water bug/watch the tree obstacle course-like areas.

Oh and also, one child (named Chloe) will often just randomly yell DANGER AHEAD. This causes both universal screaming and endless giggles. Because you will be currently stuck on some pricklies and cannot even get ahead to see what the fresh, new dangerous excitement is!

8. You will feel accomplished!

When you reach your destination, 6 hours after it all began, you will feel accomplished! Sure, the current will threaten to suck you to the large lake another 3 hours way and maybe there will be a large police dog out for a swim who wants to use your children as fetch toys. And maybe all the air will escape your tube. BUT your waterproof bag will still be dry and floating, your children, even the ones who don't belong to you, will be alive, exhausted and still able to ask for things while complaining about new things.

And to quote our delightful bonus child, who floated along with us, "I liked the crazy. And the laughing."