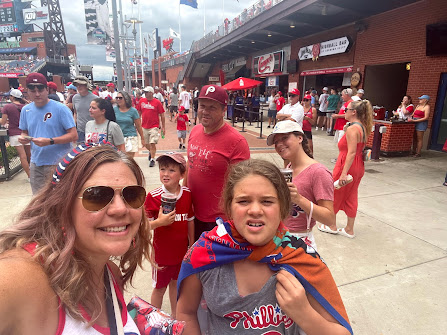 If there is one thing that experiencing extreme trauma has taught me, it is that really bad and really good and everything in-between can coexist, peacefully, in the very same moment.

For example: I have some amazing, joyful memories of time spent with Lily with every hospital stay. These really good moments are things I'd never trade away, even if I good. Which, then in turn means, I also have to accept what made these moments possible, to a certain extent, was being in that hospital having a bad, bad day.  I remember when Lily was in the NICU, sitting with my mother-in-law and getting to know her so well and loving her more than I knew possible for dropping her life to come help with mine. I would never forsake that time with Olga. It was such a good thing. My baby on the ventilator, well, that was awful.

At my brother's funeral, two of my mom's friends from Bucks County, asked me to write their eulogies. They said their families would do a bad job. Whenever I having a bad writing day, I remember these two women who were so impressed by my eulogy skills and laugh! If everything ever falls apart, I always have eulogy writing to explore.

And that was an awful freaking day.

Today, we went to the Phillies game as a family--Mike's Father's Day gift. We got the end of last night's game (thunderstorms postponed it), which ended with a Phillies win and then our game. We had great seats (thanks to a website that let's you pick your seats based on the angle of the sun at game time). We had all the treats, all the fun and we were together in our thematic Phillies gear! I had some of my own memories of being at Phillies games with my dad as a kid--always in July around my birthday. He liked to go to the "Business Man's Special" to avoid lots of young children (which made me laugh because I was a young child!). And the time Mike and I went to the Phillies game in 2017 and then somehow ended up walking into a private party with Joel Embid's and his group, and then suddenly we were at the Philadelphia Soul Championship party with the team's family.

It was ridiculous. But amazing. All those memories and then to be there with my kids--such a joy after a year without ticketed events (that require thematic outfits!!).

But, then there were some interruptions. A phone call I had to deal with me. Some sibling unpleasant moments. Post-dinner frustration at the slowness of the restaurant. And then, one of our kids had a melt-down--a full, screaming, horrific episode.

Suddenly, it felt like our good day was gone. I heard myself saying, "WE HAD A GOOD DAY! WE HAD A GOOD DAY," over and over again, in disbelief that I suddenly found myself decidedly not having a good day.

Then, my daughter looked at me and said, "I know! And now it is a bad day!"

And it broke my heart. Because, it wasn't, not at all. It was a day. There was good--the Phillies game and the win and the beach towel giveaway and the junk food and the laughs. There was bad--the drama, the interruptions. It was a day, like any other and therefore never perfect, never just ideal, but a day.

I have to remember this when I feel like I am having what I think is a "bad day," because, really there is no such thing, we just have the day to try and make the most of and never to waste.