A quarter rest is a period of silence that lasts for one beat in 4/4 time. It's a music thing and I'll never pretend to be musical or able to keep a beat, but I love a quarter rest. To me, it is a portion of silence in an otherwise loud time period. You have 3/4 of time make the music; but during that 1/4, you aren't playing, you are simply paused and quiet--but expectant. There is nothing permanent about a quarter rest--it is long enough to be noticed and demand your attention; but as soon as you pause, you will be ready to begin again. 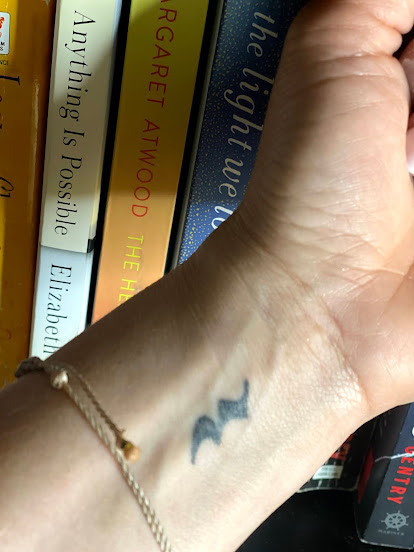 So when you don't like the pause, it is okay, but you know you can endure anything for one beat.
I have a quarter rest tattooed on my left wrist. It's there because I miss my brother and I don't want to stop missing him because to stop missing him would be to forget him. At the same time, I want to find comfort in knowing that I won't permanently miss him and that someday, I pray, our sibling music starts up again.
Tomorrow, July 9, is his birthday. He should be turning 41.
My brother loved music. And he loved the the rules and rhythm of it. David was an armchair conductor--able to keep the beat and mind the rests from his living room and often, his pew at church. He had no qualms standing up to conduct even when there was already a conductor. While this is absolutely not typical social behavior, it was okay for David. His passion for music and his full body joy made this all okay--and if someone thought it wasn't, well, David did not care. He'd just keep going and kept conducting until the hearts and minds around him had no choice but to join in his joy.
David could not speak. I have no idea what words he would use to describe his love of music. For him, music was a feeling. It was movement and emotion. It was like painting a master piece with the cells of your body--each of them vibrating, first individually and then gradually building until all cells were moving in unison and that movement became glorious arm swings and foot tapping and bright, glistening eyes and beautiful smiles.
He had a beautiful, crooked-like-a-Carrington smile (smiling more to the left, than to the right). I put my tattoo on my left wrist, so I don't forget how he smiled.
Since he could not speak, he'd often grab me by the wrist--right where my tattoo now is--and pull me to whatever he wanted me to see. This would often annoy me--I had things to do! I was busy! He was annoying! But David was relentless, so off I'd go, being dragged by my little brother (who was taller than me by 9 inches) to see whatever I need to see. Sometimes, it was food he wanted or something he found funny or some words he wanted me to read. He could not read, either, but he knew what words were and he could listen and understand. I'd read street signs and books covers and billboards and flyers, with him pulling my wrist and demanding I tell him what it all means.
So my quarter rest tattoo also reminds me that maybe I have to pause more and allow myself to take detours and look at things and figure out what things mean sometime. When I wrap my right hand around my left wrist and push on the quarter rest, I can almost remember what his hand felt like pulling me. I like remembering that--it is a bit like remember his voice, which he did not have, but maybe his hand on my wrist was his voice, albeit different than my own.
It's hard to think of him not here and to think of what happened to him. His birthday marks the passing of time--and knowing that a few months after his last birthday, he was dead, starts a morbid countdown in my head. I don't think this will ever go away or stop as long as I live and breathe; but that is the quarter rest. This time is just one very, important pause. We are not chatting to each other, he is not showing me things, but someday, the music will start again.
It is just a pause--one pause, long enough to remember, but not final, there is a whole song to play.
Posted by Trish Adkins at 6:02 PM