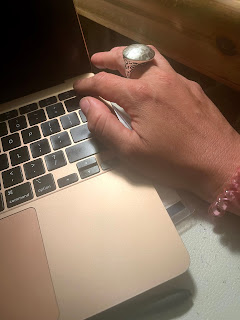 After a day of being eaten alive, slowly and painfully by my own offspring ( I think this is something that also happens in the wild), I sat down to organize my work week and discovered that my laptop would not start.

At first I thought the battery was dead, so I plugged in the charger. It made that tonal charging noise--the one that sort of says "got it. I am charging." Then I pressed the on button and nothing.

I waited and pressed again, holding it for 10 seconds and nothing.

I pressed again and nothing.

I Googled how to start your 2000 MacBook Air and tried the 10 second hold again and nothing.

Why won't my laptop turn on? I mean it is the only bit of sanity I have left today--today which should have been a good day. The kids went to swim. Nick to Summer Rec. The girls and I had lunch and shopping. I worked before and after. Then we decided to head to the pool for evening, which in retrospect was the moment everything went to shit.

First, someone could not find their bath suiting. Then someone called someone a baby. Then someone randomly screamed in the car over Hurricane Elsa. Then someone was mad we were at the pool because "no one is here I know and this is just awkward." Then someone's free water ice was too small of a scoop. Then the thunder came and we came home, defeated and hot.

Then there was more screaming: a missing fidget toy,  a fight over a television show and a garage door left open, which led to me, barefoot, holding a piece of American cheese running down Collings Ave, chasing my dog, who was chasing a man on a bicycle, while bystanders yelled that maybe the man had stolen a bicycle and others yelling that I should be wearing shoes.

No one had an opinion on the American cheese.

The man on the bicycle was screaming like my children were earlier and I can honestly tell you part of me wanted Henry to get him.

I MEAN WHAT IS WITH ALL THE SCREAMING?!!!??? JUST SPEAK NORMALLY. AND HE WAS PEDALING VERY QUICKLY! HE WAS FINE! I WAS THE BAREFOOT ONE WITH CHEESE!

Anyway, upon returning home, there was more screaming and some complaining and then everyone became calm, including my laptop that was so calm it would not turn.

So, like a grown up, I put my American cheese aside and sobbed.

And then my tears hit the keyboard.

And then I threw the charger across the room and a pen and my notebook.

Then the children miraculously stopped fighting, albeit briefly.

I was still sobbing and as my tears hit the keyboard, I held the button down and suddenly, the Apple icon appeared. And here we are: back in business.

I do think my magical unicorn tears made my laptop turn on. However, now the children have begun fighting again about who is more tired and Cars 3 and some show about a wrestler with a new wife who is a realtor and has children who always fight.

Anyway, I cannot turn off my computer tonight for fear it will never restart and I am keeping my Genius appointment--maybe my unicorn tears can help others or at the very least, I can share my problems with other technology victims and we can weep, together in the mall, at 11:45am on a Wednesday, like all adults do.

PS If you were coming here for actual technology advice, I have none. I suggest laying on the floor and sobbing and then calling an actual professional.