Full disclosure: I am losing track of the days. Two weeks ago, I briefly went back in time with my counting.  I think it is Day 197. I am sure I could just Google or ask Alexa for the answer, but that requires energy and a certain readiness to accept reality that I lack.

In case you haven't noticed, I love social media. And I love reading about strangers' lives. I think people are so interesting. A few months ago there was an intense debate on the best soap for vulvas. I mean YOU CANNOT MAKE THIS STUFF UP. People are so passionate about everything, including private part soaps.

I am part of some less-fun groups, too, like my sibling grief support. (I know I just went from vulva to dead siblings. Try to keep up, this is my very real life, it is, indeed nuts!) I found so much comfort and community in this group right after my brother died. I did not ever build any friendships beyond the group--I am not quite ready for that phase of grief. But, I did find other siblings who lost their special needs sibling, much too soon. Sisters missing little brothers and siblings, who like me, made the healing and truly hellish decision to end support and donate organs.

There are so many families broken by grief--and so many siblings who lost one to actual death and then lost the rest of their siblings because of the after shocks of death. There is a certain camp in that group and really in the world, that believes you don't have to have a relationship with your sibling if they are toxic. 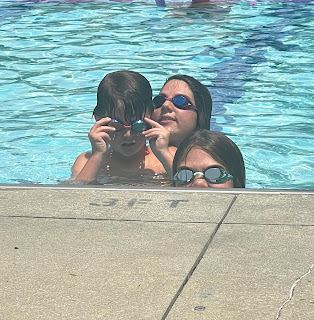 And I get it. I have a half-sister I don't speak to; not for the past lack of trying, but because she is simply too far gone for us to have a relationship. And of course, when David was alive, he could not actually speak to me.

I always wanted a sibling to talk to.

After my brother died, Chloe asked me about my sister and I told her everything. She looked me right in the eye and said:

"Mommy that is the saddest story I have ever heard."

Then she went and hugged her sister and brother.

Exactly 7 minutes later, they were all screaming and accusing each other of something.

This is how it rolls in this house. And despite my own sad story with my siblings, I am not in the camp that says you don't have to have a relationship with your sibling.

I think you have to. And I guess really, you have to try. I am one of three; but really now, I am just one. It is lonely. It is hard. It is oppressive. When my father died, I wanted a brother and sister to trade stories with or to help weigh in on the eulogy. When my brother was sick, I spent so many futile hours angry at my sister for being too selfish and too much of a train wreck to share in my fear in the way only another sister could.

You have to try. So on the days, like today, when my oldest is holding a grudge against my youngest because he refused to try her Alfredo sauce at dinner last night and when my middle is irate because my youngest does not help with the dishwasher and my youngest is mad at my oldest for telling him to stop eating cookies and they are all fighting over which song Alexa should play, I find myselfI also tend to shout things like: "YOU LOVE EACH OTHER NOW SHUT UP AND STOP BEING ANNOYING AND HUG NOW." Which does result in them turning on me, bonding over their insane mother.

And then, when they are laughing at something goofy--like Nicholas carrying around the broken toilet seat lid and worried he will get in trouble--and when they are congratulating each other on their okayish accomplishments (with the joy of someone who just won the olympics)--I know that they love each other and I have a feeling, they will always try with each other, because they already have strong, passionate relationships.

Now, I have to run because two of them are hosting a Rave-themed dance recital upstairs. Apparently, there are glow sticks involved.

At least they are friends, right?