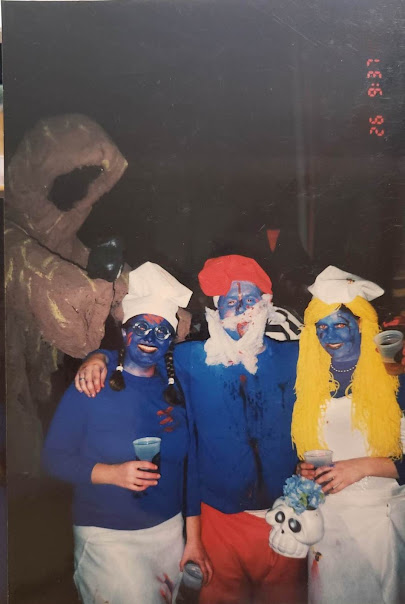 Picture it: Magic Hat Brewery, October 2001, Burlington, Vermont. It is the night of Magic Hat's legendary Night of the Living Dead Halloween party. There is a costume contest--one with a big prize. In fact the prize was so big and so prestigious that I don't actually recall what it was; but know it was big and prestigious and would have landed the winners on page 10 of Seven Days, the local independent newspaper.

The rule for the competition: you have to show up dead.

Naturally, Mike and I and our friends Jessica and Chris decided to show up as dead Smurfs. Chris was the designated dead Gargamel.

So, we cobbled together, accurate costumes. Our skin was blue (obviously). Mike was Papa Smurf and had red pants which we hot glued together. (His beard was NOT top notch.) I was Smurfette--and created my very first wig from yellow yarn and white felt (I'd go on to create a prize winning Rapunzel wig in the early 2010s). Jessica was Brainy Smurf and secured the perfect glasses and big word literature book to carry. Chris never made it and I have no idea what his costume was supposed to be. He had some sort of museum emergency or something. I don't know. It was like a long time ago. Anyway. .

We painted ourselves blue. We added blood and we got our half-drunken selves to Magic Hat. The place was like a weird cult gathering filled with people dressed as the dead.

But, then, in the middle of the dance floor, chanting along with the others like they were dead too, were ALIVE CUTE NON SCARY SMURFS.

Rivals! I remember taking deep breaths and repeating to myself that they would not be tapped for the contest because they did not follow the rule! You WERE SUPPOSED TO SHOW UP DEAD.

But, then, they won. (Something. It was loud and I am not sure if they won the big prestigious prize or like the 6th runner up.) We later had to shower for 4 hours each to remove the blue paint from our bodies. I am pretty sure, 20 years later, that I missed a spot, somewhere and I am still part Smurf.

Anyway, back to the point of this: we lost to the rule breakers! I am still angry. I thought I had forgotten about this travesty, but then Jess unearthed some photos today and I became angry again!

When it comes to competitions, RULES ARE RULES.

It is still infuriating. And, of course, reminded me of at the current state of affairs we find each other in as pandemic people. For example, we followed the rules at Christmas and quarantined for 2 weeks after our Ohio trip (which was basically us going to Ohio and quarantining there for 1 week with our family). We returned. The children zoomed. And then, lo and behold, some high school students had a rockin' New Year's Eve party--which set off a chain of events in our small town and ended with the school nurses being so overwhelmed with contact tracing, that school shut down for a while--after our 2 weeks at home.

Obviously, I am still salty about this one along with the living Smurf people.

The entire pandemic has been this way. Striving to be compliant and follow the rules and then someone missteps. I am sure I've been that someone--you've probably been that someone. And the whole thing leaves us as feeling full of cries of how unfair it all is. Because we were supposed to <fill in the blank>.

I hate that feeling. And there is no remedy to it, really. The rage and infuriation do not serve any of us. And nothing is ever fair nor is it even. We can complain, point fingers, scoff, write out our grievances, but in the end there is only one thing to do:

FIND THE SMURFS FROM 2001 AND TAKE THEIR PRIZE, THE DIRTY CHEATERS.

Give each other grace and hope, in the end, hope the grace is enough to balance out all the unfairness.