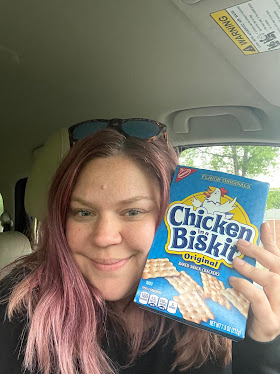 Today has been the kind of day when I eat Chicken in a Bisket crackers (washed down with a 2-day old wounded solider seltzer) in the car while savoring 10 minutes of “free” time between soccer drop off and dance pick up.

It is Monday, which means it is also the kind of day when I stare with desperate longing at the people who have clearly showered and groomed themselves. After all, I was once one of those showered, groomed, properly nourished people.

I do think, however, that Chicken in a Bisket crackers might count as protein. So perhaps I am partially-nourished.

I am not one of those people who strictly hates Mondays. I actually hate several days of the week in equal measure--depending upon what’s on my schedule for that day, who is currently involved in household drama (everyone, usually), how I slept the night before and if outside forces are conspiring against me to send me several emails about things I’d rather not discuss.

Madness can happen any day of the week. It seems, though, that today we had a winner.

Nothing really noisy and big happened—but I felt weighed down today by it all. And that weight of Monday is a lot to carry sometimes. We had a busy, not-at-home-weekend. And the result is a sense that I accomplished nothing. I have a work frustration that I’ve been obsessing over—and it is nothing HUGE—and of course, I cannot disclose it—and I am 100-percent confident it will resolve—but you know when you are obsessing, it is hard to focus.

And today, I had a whole lot of writing planned. (Which did not happen). And then my Tuesday schedule changed (17 times) and now I am left feeling that even though I worked all day, I accomplished nothing and I am tempted to reschedule all Tuesday things to a Wednesday (in July).

I tired without reason (and I little bloated from the high sodium content of the crackers).

I think my children are in the same headspace. Nicholas walked into my bedroom and passed out on the bed—just offering a yawny, “Good night mama.” The girls had their traditional evening argument/shouting match, but even that seemed to resolve quickly out of Monday exhaustion.

So, friends, that’s Monday in a Biscuit (I had to spell it the proper way. I am sorry BISKIT is like a bad 90s hair band.)