Leaving Home and Coming Back (Day 151)

When I was 23 years old, I had a job offer in Burlington, VT--a world away from my row house near South Street in Philly and my childhood home in Bucks County. I had never lived more than 45 minutes from my parents--and never out of state. I wanted the job, but I did not know if I could leave my family. 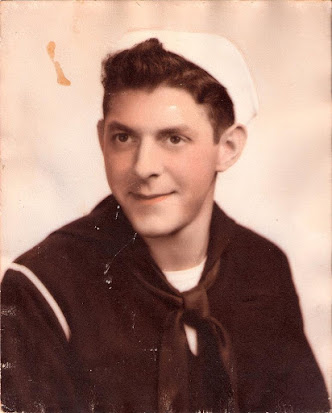 I talked it over with my Dad endlessly. And I really, really needed his blessing. And he gave it. I remember he said, "Tricia, I've been thinking about this and when I was your age, I left my family and left home. It will be good for you. And then you'll come back, like I did."

I remember laughing because when my father was 23, he left home to go fight World War II, not to work for a non-profit in Vermont. You could hardly compare my leaving with his. But, I do know, from hearing all my Dad's stories about being in World War II that before he left, he got his father's blessing, too.

And I also know, quite obviously, that he came back. He was lucky. And in turn, I exist, as do my three children.

When I was in college, I formally interviewed my Dad about his time growing up in the Great Depression and then in World War II for an oral history class I was taking. I have hours of tapes--tapes I am still not quite ready to listen to again. But, those interviews stuck with me.

My Dad felt called to join the fight in Europe--first he and his pals had this plan to enlist in the Canadian Royal Airforce. That somehow did not work out (I laugh now thinking of my 20-something Dad hatching a plan to get in on the war sooner with Canada). Then, he tried to enlist in the U.S. Armed Forces, but a childhood ear infection left him deaf in one ear--deaf and considered unable to serve.

But, my Dad was driven. He felt called and compelled. It was his duty.  He grew up with a father, my grandfather, who fought in World War I--in the Army, in the trenches and was gassed. My grandfather died of a heart attack on Christmas Eve long before I was born. I often wonder how long he would have lived had he not be on the receiving end of mustard gas--would I have gotten a few years with him?

So, my Dad joined the Merchant Marines. He had to sign on to each and every voyage. He had the option of stopping at any point and did not have the same obligation as an enlisted man would have. He signed on and sailed over and over again until the war ended. Twice through the Panama Canal. Torpedoed and drifting in a lifeboat in the Atlantic. Witnessed the deaths and the despair and the complete madness of sailing on a merchant ship during a world war. He kept going back--bringing precious cargo to support the war effort--literally fueling and feeding and arming the allied forces all over the world.

During World War II, 30,248 merchant seamen died--their death rate was proportionally higher than any of the armed forces. My Dad told me stories of leaving port in a convoy--after all there is protection in numbers and once, as they began to break convoy, seeing an oil tanker go up--either torpedoed or some other accident.

And he still signed on to a ship again and again. 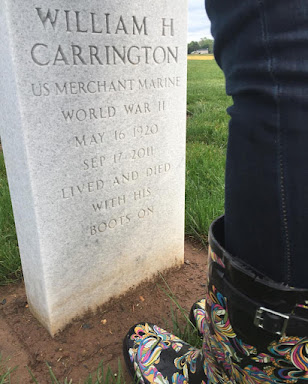 His bravery and the bravery of his fellow seamen was not something that was recognized until the year I was born--1977--32 years after the end of World War II. In that year, World War II merchant marines were recognized by an "improvement" to the GI Bill. My Dad always chuckled when he spoke about the GI Bill--he was 57 years old, about to be a father for the second time, had completed his education (and no interest in getting more) and had owned lots of houses (so the mortgage assistance was not on his radar).

The thing is, my Dad did not go to war for the recognition. I don't think any soldiers do--they go because they are called to defend and protect. They go because, like my Dad always reminded me, they love peace and justice and sometimes, sadly, horribly, peace and justice come after the war and injustice. Someone has to be brave enough to be the bridge between peace and war.

When my Dad died, I was adamant that he receive the military honors he deserved. His only wishes were that he be cremated; my wishes were that the world knew and understood the sacrifice he made when he was just a kid. I am so blessed that he left and came back--came back to become my Dad and to give me the gift of his experience.