It is prom season!

The high school in our town does an actual "Promenade" in which the prom couples are introduced and have to parade about in their fancy clothes. It seems really high pressure--what if your date is not the right date or there is some scandal or you don't have a date? What if you trip? What if you fall?

Then, last night, I watched Saturday Night Live (yes on a Monday, as per tradition) in an effort to cheer myself up after my pathologically depressing blog last night. It worked, the skit Prom Show was legit the funniest most accurate thing I've ever watched about prom night!

Which, of course, has me all nostalgic about my own proms! I think my favorite part about the prom, besides my date, was the fashion! So, since everyone is so interested in the time when scrunchies were first accessories, I thought I'd take you all down memory lane to the mid-late 1990s!

(The following blog is brought to you by me reminiscing like a 87 year old woman! If I had a slide projector, I'd invite you over to look at the pictures!)

You'll never guess who my prom date was?

Okay, maybe you will, it was my husband!

He was not my husband then, of course. He wasn't even technically my boyfriend at the time. I mean we had been dating; after he courted me (by stalking me in New Mexico). I had my sights set on another guy as a date--but then Mike wore mismatched socks, confessed his love for Nirvana and Pearl Jam, was hated by all adult chaperones on our New Mexico trip and well, that was all it took.

I am a sucker for making authority figures angry.

Anyway, Mike was only a sophomore at time, so I had to take him to my junior prom and then my senior prom, which was his junior prom. He skipped his senior prom and we went to see Phantom of the Opera at the Bucks County Playhouse in New Hope.

For my Junior Prom,  my dress was totally, 100-percent inspired by Beverly Hills 90210 Season 1 Episode 21 ("Spring Dance") in which Brenda and Kelly wear the same dress.  As evidenced here: 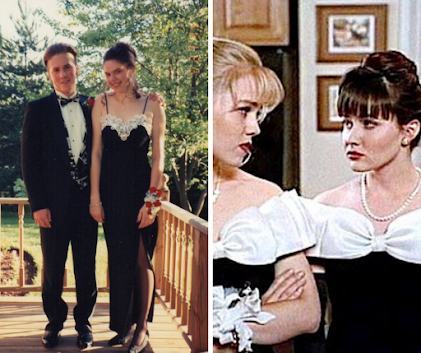 I told my mother that I wanted a black dress with white trim and totally made her race around the Willow Grove mall until we found it at Macy's. I have no idea why I was wearing black sheer pantyhose in late May. I loved the Willow Grove mall--the smells, the clothes, the sound of the cashier register and just being there for hours and hours.  (Note: The only reason I don't have bangs is because I totally DO NOT have the forehead for it. )

Anyway, I don't remember much of the actual prom, because Mike and I made out the whole time on the dance floor. Then we made out in the car on the way to a friend's house for a sleepover. I don't even know who drove. My parents 100-percent had no idea boys were sleeping over.  I have no idea why the boys were allowed to sleepover. But it was fantastic and taught me to never trust my own children.

I do remember the week after prom at school and all the gossip. It was glorious--totally raised my social real estate to be a sudden person of interest!

The Senior Prom had me abandoning my fandom of Brenda and Kelly for Shirley Manson, lead singer of Garbage. God I love her still. (In fact, tonight I've discovered that she's gone lighter and has pink hair, so we are clearly long lost besties.). Here's me and Shirley in 1996: 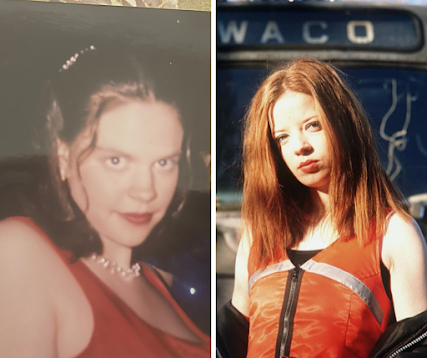 I remember my Dad asking me if I was depressed because of my dark lipstick. I told him, of course: Kurt Cobain was still dead and he would never understand my angst or what it was like to be a teenage girl in Bucks County, Pennsylvania.

I mean, how could he?

Anyway, Mike and I were still the absolute best couple, ever: 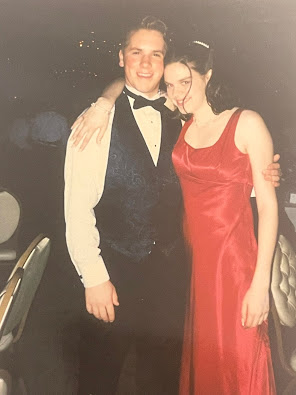 This prom had another unauthorized sleepover (my children are never, ever doing this. I became suspicious the day they were born) and then the next day, we spent at beach, shopping on the Ocean City boardwalk and I believe one of us got a piercing. (But that could have been another day down the shore or another piercing, who knows!).

I don't have a picture from the prom skipping year. There were no phones with cameras then (thank GAWD!). But, I am sure my evening attire was inspired by Courtney Love or Poe or Mazzy Star.

What did you wear to prom?