May 11, 2007: Lily was diagnosed with a bladder infection. She had been vomiting on and off for a month. We had been in and out of the pediatricians office every other day for that month.

May 16, 2007: There was no bladder infection. There was a brain tumor. For 5 days, we thought Lily would get better with antibiotics, now it was neurosurgery and oncology and radiation. 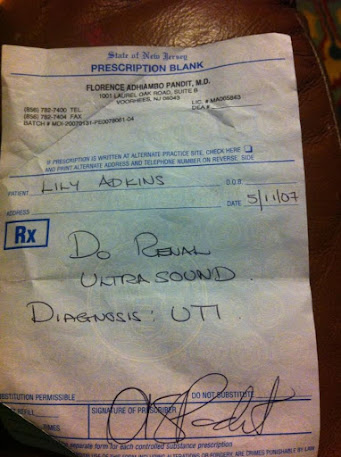 I thought about writing today about how absolutely egregious it is that our pediatrician did not send us for a scan sooner. I hear stories like Lily's all the time--a series of pediatrician visits, doctor's passing off clinical signs of hydrocephalus for normal childhood illnesses (because the signs are just like normal childhood illnesses) and finally, a diagnosis driven by parents knowing that their child needed more than some IV fluids and antibiotics.

However, that sort of negativity and finger pointing does little to encourage and change the reality for children with brain tumors. The truths is things are often not what they seem--even to the most educated, experienced and qualified among us. We often miss what's right in front of us. Morning vomiting for a month in a baby with a head tilt--well that is probably not a stomach bug, because those are the classic signs of pressure in the brain. But, then again,  it could also be a stomach bug.

It's easy to miss things.

Today, on May 11, 2007: Lily is 14 years out from her misdiagnosis with a bladder infection. She went to morning crew team practice. She went to school. She did her chores. She talked to her friends. She maybe did her homework. She went to Jazz dance class.

In all of that, you might see a normal, regular kid. But there are other things afoot.

Lily wakes up at 4:30 am and stretches and rubs her muscles awake. The brain tumor left her with ataxia--what Lily used to call "feeling a little shaky." Lily has all her stuff laid out the night before--it takes her a while to organize her things--her brain tumor also messed with her fine motor and executive functioning skills. She is messy; because sometimes it is too hard to make everything work to make her less messy.

She goes to school and sits in the front of the classroom when she can. It helps her focus more. Lily will spend most of the day refusing her accommodations and trying to shake her aide  (Lily says she does her best to ignore her; but I am pretty sure Lily has charmed the aide like she charms all adults.). She gets home and sees her Honor Roll acknowledgement from the school district--to Lily that is a gold medal. She fought hard for that honor with late nights and extra time. Lily does her chores. She talks to one of her very best friends--Jackie. Lily met Jackie when she on the Temple Lacrosse team. Lily was adopted as an honoree member.

She can't sit on the lacrosse sidelines for now--NCAA rules bar high school athletes from getting special privileges with college athletes. This is a beautiful problem to have.  Lily goes to dance--she has been dancing since she was 4 years old. She could barely walk when she started. But, I shoved her into Miss. Lisa's ballet/tap and said a prayer.

Dance is fun; but dance is also a way for Lily to work on her alignment and strength and balance. Lily has been dancing and swimming and riding horses for all long as she can remember. These are all fun activities--but they've always been therapy and had a purpose: help Lily get stronger.

Lily is the things that happen in-between and after. She is the kid who will try anything and go anywhere, even if she does not know a single person. Lily will face hard things--like badly losing a race--and she'll be  upset, of course, but she'll go back without shame. She'll be over the moon for other teammates who took the gold. Lily will come in last after a run; but show up first the next day.

This kid--this kid--works for everything she has and she does not stop.

In these days between May 11 and May 16, my tendency is to relive these days with fear. It's like my body remembers what's to come. The days before her diagnosis, I was defeated. I did not know what was ahead, but I felt like there was no way I could show up as a mother. But, then I did, for Lily and like Lily does every single day.

It is not just pride I feel for Lily, it is awe. The beauty of her strength lies in every single failure she stood up from. I don't know that I could do the things she has done. I don't think many of us can.

It is these days in between that tell me more about Lily's story than other days. She looked like a normal, little girl between May 11 and 16, 2007.  But the truth was right there in her smile:

Lily is a warrior.