About 2 hours ago, all three children were just screaming. They were screaming at me, screaming at each other, refusing to do 10 minutes of basic chores. I was screaming. The dog was hiding. The cat was probably peeing on someone's bed in protest.
And I just wanted them to empty the dishwasher and take out the trash.
Basic things.
I texted my husband that I could not handle it and no one was going to bed ever again, they were just going to stay up and scream and clean.
And then I thought, what would happen if I simply left for a couple hours? I started to think about skipping town and going to Target for an hour. And then realized I am dressed like a hobo and would undoubtedly see 17 people I knew and would have explain why I looked insane and that I abandoned my children.
Children can be really frustrating and impossible.
And I want to tell you, that it does not matter how many right things you do, they still have minds of their own and they still love you and trust you enough to misbehave in the worst possible ways.
Sometimes, I wonder if I can ever actually leave them anywhere without a disclaimer pinned to their backs that reads: "Might scream uncontrollably and try to murder their siblings. Do not make eye contact."
I mean this is like the potty training, right? Everyone says children won't go to college in diapers and will eventually get the whole toilet thing. So they surely won't go out into the world all feral and volatile, right? They will be both potty trained and trained to remain calm, right?
Potty training did work out. But I have my doubts about the feral situation.
Anyway, the screaming stopped--I think they got tired. I doubt it was because I repeatedly told them to stop screaming or that I threatened them with random punishments (you are grounded! no popsicles!). I suspect they simply experienced the natural fatigue that comes with screaming over a dishwasher and some spilled legos and forgot why they were screaming in the first place.
Then, I found them like this: 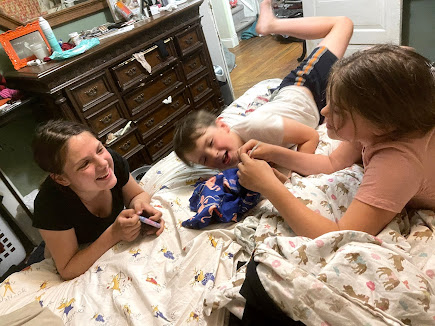 Laying on the bed in a storm of chaos and scattered items, laughing and sharing stories from their years in school. They are mostly mocking a variety of teachers and other authority figures. But they are doing it together and they are not screaming things like "I HATE YOU" or "NO I WILL NOT I WILL NOT" or "I DON'T PAY THE MORTGAGE WHAT DO I CARE."
I began to weep with gratitude.  Maybe, they will grow up to love and respect each other.
But, then, apparently Lily was talking about a Mrs. A and Chloe was talking about a Mrs. Kay and there was confusion. And by confusion I mean the tiniest little spark of an argument.
So, I shut the den door and just pretended I was at Target.
Posted by Trish Adkins at 7:16 PM