Writing about motherhood is not an easy thing.  I have three children and a mother and a mother in law and I am friends with countless mothers--but I don't think I am any sort of expert on how to do motherhood. 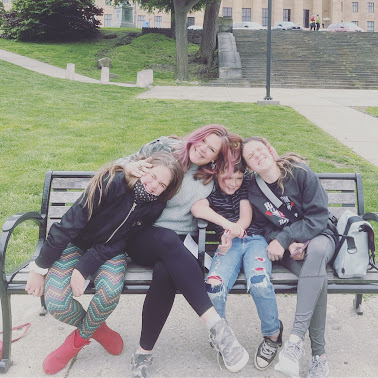 Today was a lovely Mother's Day--presents and homemade cards, brunch delivered, Chloe's lacrosse game (with all of us there together, for once!), the Art Museum (my favorite place!) and dinner at Pizzeria Vetri (capped off with their Nutella Pizza, which my children talk about weekly.). Then home to curl up on the couch with a book and Nicholas building legos and me thinking, what am I going to write about for Mother's Day?

I was reflecting on how much time we left as the Adkins, Party of Five--my children are growing up. There are already plenty of days or night when we the party of four or three or two or even just one. Lily is a Freshman; Chloe is middle school and Nicholas, who seems still little, won't stay that way. Someday, there will be more of us, maybe, spouses and partners and grandchildren.  But for now, I just want to hold onto being the party of five. My three crazy, strong, willful and loving children, however, have places to go and adults to become.

Times are changing here--but then, of course, they always were.

That's how it goes as a mother. I came up with three fundamental things that I've learned in my 15 years in this gig:

1. Motherhood is a constant act of being reminded that you have no control.

2. Motherhood is a constant act state of change.

3. Motherhood is a constant act of letting go. 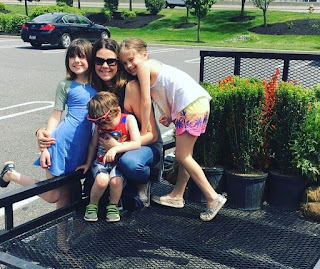 The night I became someone's mom was a night marked with trauma and joy--joy that my baby actually survived. I was sick, Lily was sick and nothing was as I planned. I had no control. Everything I thought about birth had changed. And Lily was no longer safe in my body--she was out in the world and would have to breathe for herself using immature lungs--I had to let go, completely.

Her life was hers, now and no longer my own.

While my motherhood origin story is traumatic--it is fundamentally what the regular days of mothering are like. Take any given weekday--one kid will be in a terrible mood, another will be struggling with a new problem and another will be pushing for more freedom. I have no control of moods. I cannot resist or stop them from growing up and I have to let them.

And these three things are so hard to accept some days. I feel like I was just picking out their clothes and now, they are rooting through my closet and stealing mine. But, then other days, it freeing--their independence means more space for my independence. And future days, I have no idea what they will hold, but I know my place: it is just to be there loving them, guiding them and letting them go.