How to Descale Your Keurig (Day 95)

Today, I fixed our Keurig with my gold leaf dangly earring and I have to tell you, I feel like a spy, super hero and a plumber all rolled into one! 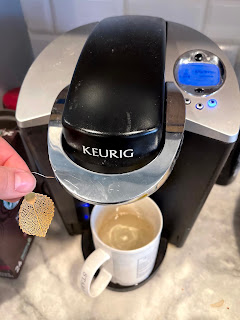 Here's the back story:

This morning at 4:30am, our Keurig stopped working. Normal people don't require 4 cups of coffee in the first 30 minutes of their day, but I do! It is week two of the rest of my life as a crew parent who wakes up at 4:30am and I don't think I will ever fully adapt to the waking up with the moon.

I know I should not complain. I am not the one who has to row on the river while the moon is still up or run along the river while the world is silently sleeping. And I do truly feel beyond privileged to have a daughter on the crew team and in case you haven't figured it out: I am really proud of my miracle daughter. On May 16, it will be 14 years since Lily was diagnosed at 14 months old with ependymoma, a type of brain tumor.

She is extraordinary and relentless. And I'll talk about crew every single day because it is such a gift! (way better than that brain tumor)

ANYWAY, back to the Keurig. It refused to brew. It made this almost-normal-brewing-sound and then it would make a very not normal sound. I decided it must need to be "Descaled." Descaled is a fancy word for using white vinegar to dislodge all the mineral bits in the water lines.

I grabbed my vinegar and rallied my non-caffeinated self to descale the Keurig. But, it wouldn't work. It still made the almost-normal-brewing-sound and then quite suddenly there was a sound of something filling up the reservoir, when the reservoir should be emptying to make my coffee. Instead, I watched in ABSOLUTE disbelief while the Keurig water reservoir filled up more than it was before.

So, naturally, I hit all the buttons, held them all down for 5 seconds in a variety of patterns and then I unplugged it and said very bad words that were banned in the house a while ago (note: I have not been remotely compliant following the no swearing rule). Then I plugged it back in, took a BIG BIG BREATH, and lifted the pod door, slammed it down and pressed the brew button.

I heard the same hopeful noise, followed by the unhopeful noise and then the filling of the wrong thing!

Besides the Keurig being an essential source of fuel around here, it has sentimental value. When was a baby, my parents came to stay the night. My Dad made coffee in the morning and went to heat it up the stove because it got cold. He did not realize that our coffee pot was a carafe, not a heat-resistance metal or glass container and the carafe broke. He was so upset and it was the first time he ever told me that he worried he was getting old. (He was like 86, haha). But, in the next breath, he said, "Let's go buy one of those Keurigs! I have a coupon for Bed, Bath and Beyond!"

Anyway, I needed to fix it!

So, I rallied (inspired by the relentless spirit of my daughters!) and realized, I could do hard things. I googled my problem and became irritated by the long YouTube videos and instructions devoid of any personal stories or nonsensical interruptions!

I went rogue and I began to take the Keurig apart and tried to stick toothpicks in areas that could be clogged. But the toothpicks were too big! Then I tried to find a pin or a paper clip, but we don't have anything useful like that because the children take everything useful and use it for terrible, messy things like building a house for squirrels or constructing a ladybug trap in the middle of the living room.

As I pulled up my hair into a pony tail, feeling desperate and broken and so thirsty for coffee, my hand bumped my dangly earrings and I realized, everything I needed was LITERALLY right in my head.

So I removed my earring, straightened out the post and I shoved it in every hole, plug and tube until, suddenly gross, gunky, coffee grounds and other debris came out. Then, I took another big breath, turned on the Keurig and hit brew.

It was the greatest thing I've accomplished so far this year. I might send my life hack to Woman's Day magazine. (Did I ever tell you that when I interned there I got to open the mail of "life hacks" which included tips on how to build an in-ground swimming pool out of trash bags.)

I feel like I saved our family! Of course, now if I could only find the coffee I brewed. . .I could drink it.  . .